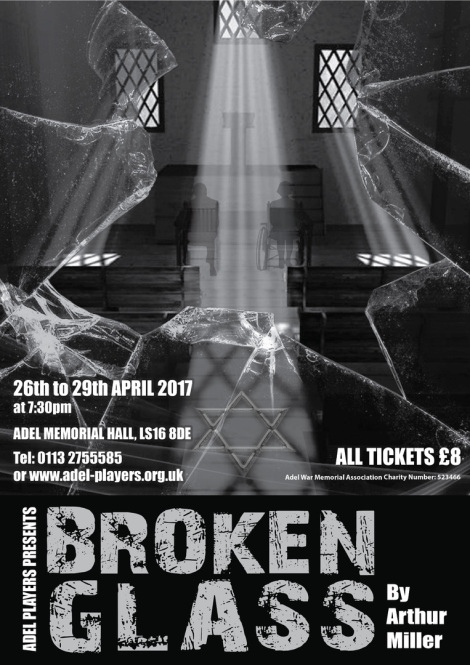 Arthur Miller (1915 - 2005) is considered one of the greatest American playwrights of the 20th century.  His best known plays include 'All My Sons', 'A View from the Bridge', 'The Crucible' and the Pulitzer Prize-winning 'Death of a Salesman’. His lesser known play 'Broken Glass' was written in 1994 and in the same year the London production won the Olivier Award for Best Play.   Set in Brooklyn in 1938, it centres around a Jewish couple Sylvia and Phillip Gellburg who, after years of marriage come to realise that they hardly know each other.   Phillip, obsessed with work and his desire to assimilate, has little time for his wife Sylvia, but when she suddenly develops a mysterious paralysis after reading newspaper reports of "Kristallnacht" (two days of anti-Jewish violence by the Nazis which took place in November of that year) local GP Harry Hyman is called in and finds that Sylvia is obsessed by the horrific news from Germany.   However, when he meets Phillip, he begins to uncover numerous deceptions and hostilities between them which may lead him to the answer.

We were delighted that this production was seen by over 300 audience members. Thanks as always to those who support us. We were also delighted that this production enjoyed great success at the Wharfedale festival of Theatre 2017 with multiple awards including Best Play. See News and Notices for more.  'Broken Glass' was a challenge to stage but immensely rewarding and we were extremely gratified by the audience reaction to this powerful and emotional piece. Scroll down for a sample of reactions and a review, and here also are some production pictures by way of reminder. 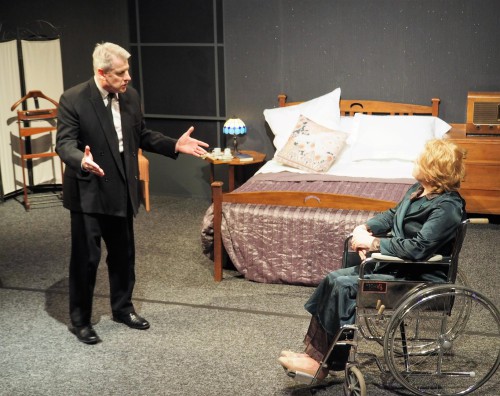 Rob Colbeck and Dianne Newby (as Phillip and Sylvia Gellburg) 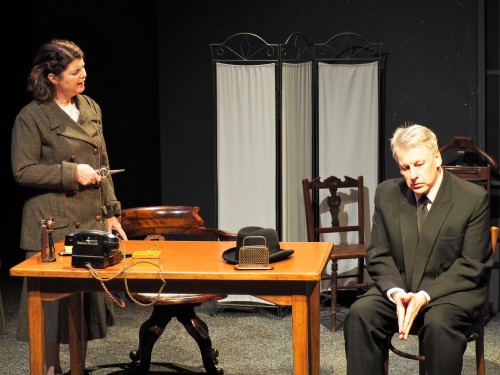 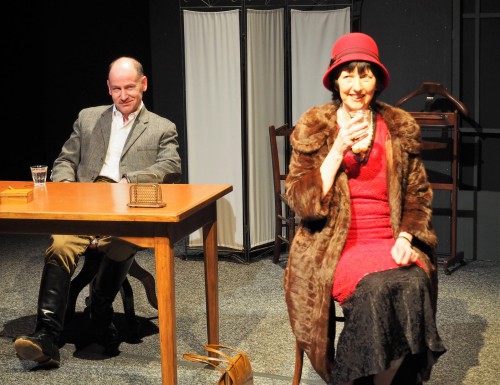 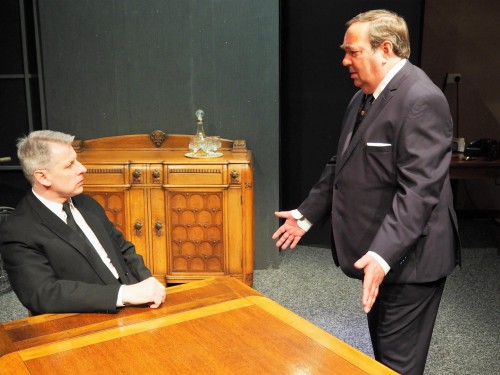 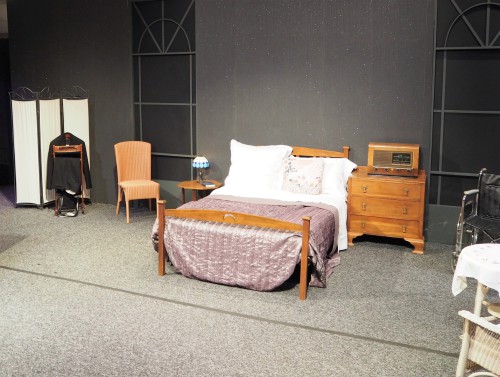 ““Broken Glass” – one of Adel Players’ best productions.  Special congratulations to Rob and Dianne.  Many thanks!”

“I just wanted to e mail my congratulations to all at Adel Players on the recent production of Arthur Miller's 'Broken Glass', which I saw on Friday night. I thought the whole production was impressive, not least the performance of Robert Colbeck as Phillip Gellburg which was superb. I was particularly impressed by his handling of the spectrum of emotion experienced by the character as well as keeping up a very good New York Jewish accent. It was an ambitious choice of play but everyone rose to the challenge. It is great to see how Adel Players are so versatile and not afraid to tackle the work of major playwrights.

A word about the scenery: this is an aspect of your productions that always amazes and delights me. I appreciate the hard work and dedication that go into a backdrop, props and costumes. All were spot on for the period. But the subtlety of the grey apartment walls with their glistening fragments reflecting not only the Broken Glass of the title, but the fractured marriage and indeed Kristallnacht itself, was genius.

I hope you will pass on my appreciation. I look forward to the next production”.

“Many, many thanks to all concerned for an excellent display of your talents last night at Adel Players. Apart from being emotionally drained, feeling upset and tearful at the very end, I can honestly say that I enjoyed it all. I was able to speak to Robert Colbeck afterwards in the bar and convey my thanks and appreciation for his and Dianne Newby's performances especially; mentioning that all the other actors played their parts so very well”.

“Wow a tour de force indeed!  What an outstanding production of Arthur Miller's play, Broken Glass.  One member of our group had seen it before many years ago at The Leeds Grand he thinks and rated this one as highly.  And the previous one was obviously a professional production”.

Our thanks go to Ann Lightman for this review of the production written for our community magazine:

Adel Players had chosen “Broken Glass” by Arthur Miller as their April production. So what had a play about a broken marriage set around a Jewish household in 1938 in New York have to offer Adel audiences? It soon became obvious that the themes were timeless, as relevant today (with Islam and the recent rise in hostility to all immigrants) as then. I felt it gave a valuable insight into the causes of domestic and racial violence and the showed the necessity of face-to-face communication.

In her Director’s notes Beth Duce the director wrote:  “...and if our production gives you plenty of food for thought, we will be very content”. Box well and truly ticked! So many aspects to consider! I can see why Arthur Miller is/was on the school curriculum – deep issues woven into a powerful, gripping theatre experience.  Masterful! That we could immerse ourselves in the play is due in no small measure to the professionalism of the Adel Players…actors and backstage….the setting and characterisation was superb.

The broken marriage comes to light when the wife (Dianne Newby) suddenly cannot use her legs, despite there being no obvious physical cause. Her husband (Rob Colbeck) visits the family doctor and it becomes immediately obvious that here is a man not at ease with himself despite being “a success”. Through the play, as the character unveils before us, we see how he has worked at his career to the detriment of every aspect of his life. He has repressed his Jewish heritage and, losing part of himself, is unable to relate to those around him. This uncommunicated repression erupts as violence, bringing the first Act to a dramatic and shocking close.

It seems the paralysis has been brought on by the wife reading newspaper accounts of the horror inflicted on Jews by the Germans on “Kristallnacht” in November 1938. The most visible image of this was the smashed glass of the Jewish-owned shop fronts – hence the German name for the pogrom and the title of the play – a translation. She asks why it was allowed to happen, where was the U.S. or Britain? The reaction of the other characters strikes us now, with hindsight, as odd/wrong – “why care, it is a far off country?” (Try substituting Syria for Germany!). The consequences of being passive can be as damaging as being violent (in a marriage or in a country).

One is led to ask why the repression? Again both in a marriage but also in a wider context. This is not just relevant to being Jewish – but is faced by all who differ by race, religion (e.g. Islam today), life-style, poverty. There is this drive to succeed, to lift the family out of poverty, to blend in. No wonder such people have mixed feelings about their roots – some try, successfully (the Doctor who married out), or unsuccessfully (Rob’s character) to repress them. Others become passionate about their promotion, which leads to problems within as well as outside the community.

A love of nature and beauty comes out strongly by at least two characters in the play. In “the old country”, many Jews were rural, but poverty (and the need to be within walking distance of a synagogue on the Sabbath) meant that immigrants became urbanised. Not having natural beauty easily accessible, human beauty becomes especially revered. The couple of references to female beauty reminded me that Miller (born in Brooklyn, N.Y, to Jewish immigrants) was married for five years to Marilyn Monroe. As this play was written in 1994 – very late in his career (he was 79 according to the helpful programme notes), I suspect some aspects of the play may be auto-biographical.

The three main characters of the cast, the married couple and their doctor, (David Lancaster) were ably supported by Jane Claire (doctor’s non-Jewish wife), Janet Porter (sister to the ill wife) and Owen Carey-Jones (non-Jewish boss). The New York setting was subtle but unmistakeable – the authentic script aiding the actors.

I would like to end with a “thank you” to the back-stage team. The stage set (lovely furniture!) immediately placed it in a wealthy 1930’s location. The wallpaper backdrop glinted like shards of glass, a constant reminder of the title. The three locations set alongside each other worked (though I was glad that the two main ones were so near to where I sat!). The costumes were superb – the totally black suit and tie worn by the husband immediately conjured up someone in mourning (for part of himself it transpired!). The ladies were so smartly and fashionably dressed, you were reminded that many Jewish immigrants became tailors. The seamed stockings were a nice touch (reminding many ladies in the audience of their youth I suspect!). The lighting was superb with a central “Star of David” sometimes prominent, sometimes not. The music added to the ambiance of the production, which was done in the round, so hopefully everyone felt part of the action. Some of us on the front row could hardly breathe as the tension mounted, we felt such a part of it!