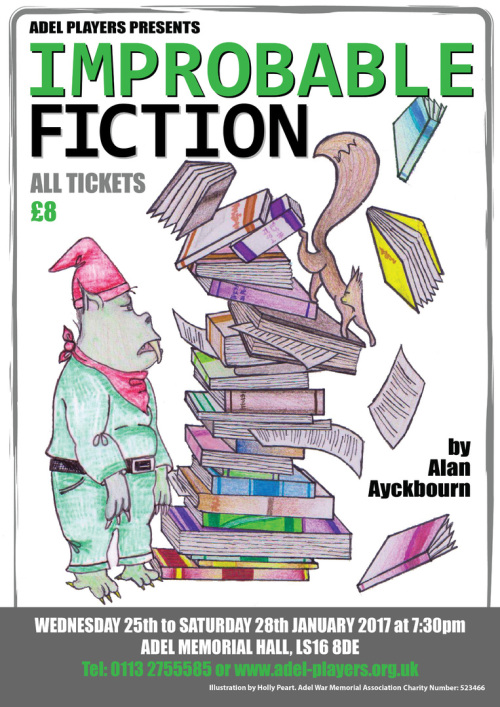 Our January production closed on the 28th having been seen by over 520 audience members. Our thanks as always to those who braved the January cold to support us.  Audience feedback was wonderful and we are delighted that so many people enjoyed this madcap comic romp from the pen of Alan Ayckbourn and directed by Mike Andrews, ably supported by Alan Foale. Act 2 in particular was a side-splitter, with a giant walnut on wheels, alien abductions and seven-foot headless monsters amply explaining why this was indeed an "Improbable Fiction"! Here are some pictures to remind us of the fun. And scroll down for reviews and audience reaction. 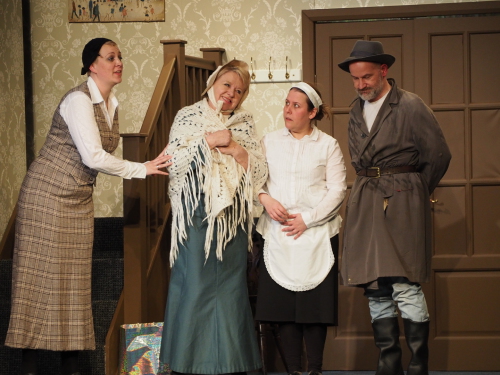 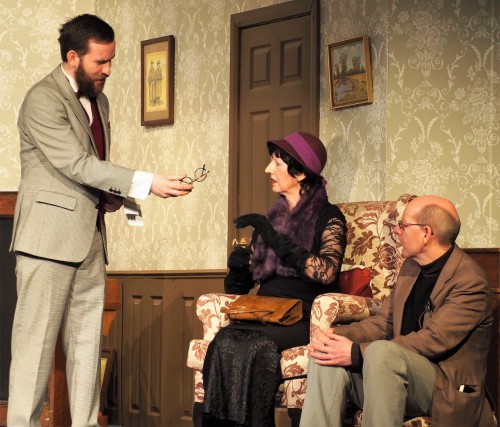 Matthew Newby (as Clem), Janet Porter (as Grace) and Damian Burras (as Arnold) 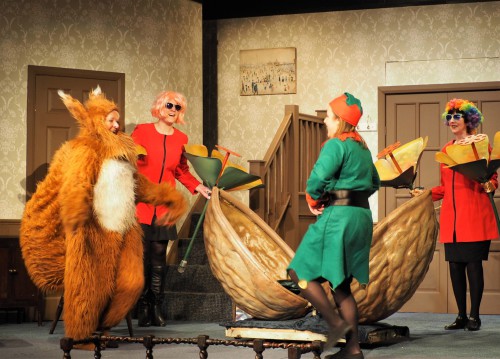 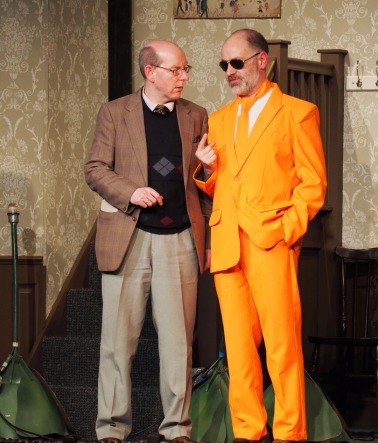 "Wow! That was a tour de force indeed.  We thought it was definitely one of the very best plays Adel Players have done.  The acting was superb and the play very funny.  How everyone remembered all their lines in their different character roles I have no idea but they were all outstanding.  On discussion afterwards we were all wondering if the hobgoblin would make an appearance - and it did and well done to the props and costumes department, it was hysterical. Thank you to everyone at Adel Players.  We gave that 5 stars".

"Congratulations to everyone for Improbable Fiction where the latter part was so unexpected but amazing, especially with the endless costume changes. Dianne Newby was as brilliant as ever, her face tells the story without her body having to move at all! All the other parts were played in an excellent way, therefore, I will not mention them individually by name. We four, on the front row as usual, enjoyed it all enormously. My husband was crying with laughter and we all laughed out loud time and time again".

On a cold, but thankfully, not snowy January night (as in previous times at the Adel January performance), we were once again entertained by the Adel Players and their production of Alan Ayckbourn’s ‘Improbable Fiction’.

The play premiered at the Stephen Joseph Theatre in Scarborough in 2005, and we were fortunate to have a number of the original props on stage, which included a superb squirrel costume, as well as a walnut and furniture that could transport the set from Victorian to modern times, in an instant (with the change of a telephone!).

A varied range of props for an interesting group of writers who in the first Act meet at the chairman’s house (Arnold). Here, the writers tell of their plans for their own piece of work – and in the second Act, Arnold, seems to wander into the imaginations of the other writers.

Each produce very different styles of writing. There is Arnold (Damian Burras) who is a writer of instruction manuals. He seems very serious and straightforward, but his character shows a real depth of feeling for Ilsa and indeed for the other writers. As the pivotal character, hosting the writing group in his own home, he lends an air of sobriety to proceedings in the first Act which contrast with his ‘visions’ in the second Act.

Another writer is Grace (Janet Porter), a mother of grown-up children, who wants to write children's books (but she appears to have had more success with drawing the illustrations of Doblin the Goblin and his friend Sid the squirrel). As a young girl she was taught by Brevis and her memories of him, impact upon her ability to develop her writing, which she attempts to conceal from him.

Jess (Dianne Newby) is a farmer, who wants to write period romance novels. The contrast between her farming life and her yearning for Victorian romance provided great humour which was particularly demonstrated in the second act.

Vivvi (Jane Gorton), is busy writing detective novels, but clearly using her own romantic experiences, to provide her characters with some substance.

Brevis (David Lancaster) is a retired maths teacher, whose recollections of the classroom provided great hilarity. He is still writing musicals but was clearly not a music teacher for a reason!

Ilsa (Digna Sindin Rodriguez), is also present and is a carer for Arnold's mother during the Writers' group meetings.

The characterisation of each individual is beautifully set up in the first Act, which all takes place in the front room of Arnold’s house. Each character seems unable to particularly help the other as they attempt to progress their writing. Each writer has a completely different approach and style – and each individual story reveals more about the inner psyche of each character.

The second act starts exactly where the first one left off and as Arnold flits back and forth through the stories, he gets caught up in solving the mysteries, and experiencing a multitude of writing styles and plotlines, which are fast moving and ever changing. Particular credit must go to the stage manager and support team who facilitate a range of costume and furniture changes to move seamlessly from one story to the next. The stage set was even designed to allow a particularly large costume to fit on stage with relative ease.

At one point, the most unlikely of musical characters, Brevis, sings a song from one of his musicals and Doblin comes to life in front of our very eyes, along with Sid the squirrel and alien agents in fluorescent outfit.

Part of the inspiration for the play was reported to be a talk that Alan Ayckbourn once gave to a writers' circle and the title was inspired by a quote from William Shakespeare's Twelfth Night:

"If this were played upon a stage now, I could condemn it as improbable fiction." – Twelfth Night, Act III, scene 4

As the story from each actor merges and links together in front of our very eyes, it is indeed ‘improbable’ that such a concoction of fiction could ever emerge, but it brings great humour in the way that it unfolds, assisted by wonderful props and beautiful costumes.

At the end, Arnold's aged mother bangs on the ceiling once more. He goes upstairs saying "It was a quiet evening really. Nothing unusual ..." Yet, once again we were treated to something that was not just unusual, it was a unique piece of writing, performed to the highest of standards by the Adel Players. 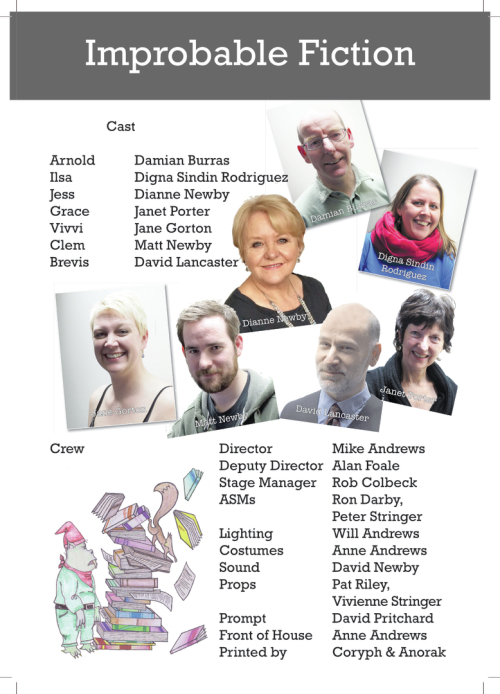