By R.C.Sheriff, directed by Bernard Riley

Having waited many years to perform this powerful and moving play, we were delighted that we ended a very successful run having seen more than 450 audience members through our doors, many coming on the basis of "word-of-mouth" recommendations. So once again our thanks to all those who support our plays and help make them the special occasions they are. We hope you enjoy the reviews, notes and pictures posted here and as always if you have any comments please do not hesitate to get in touch. 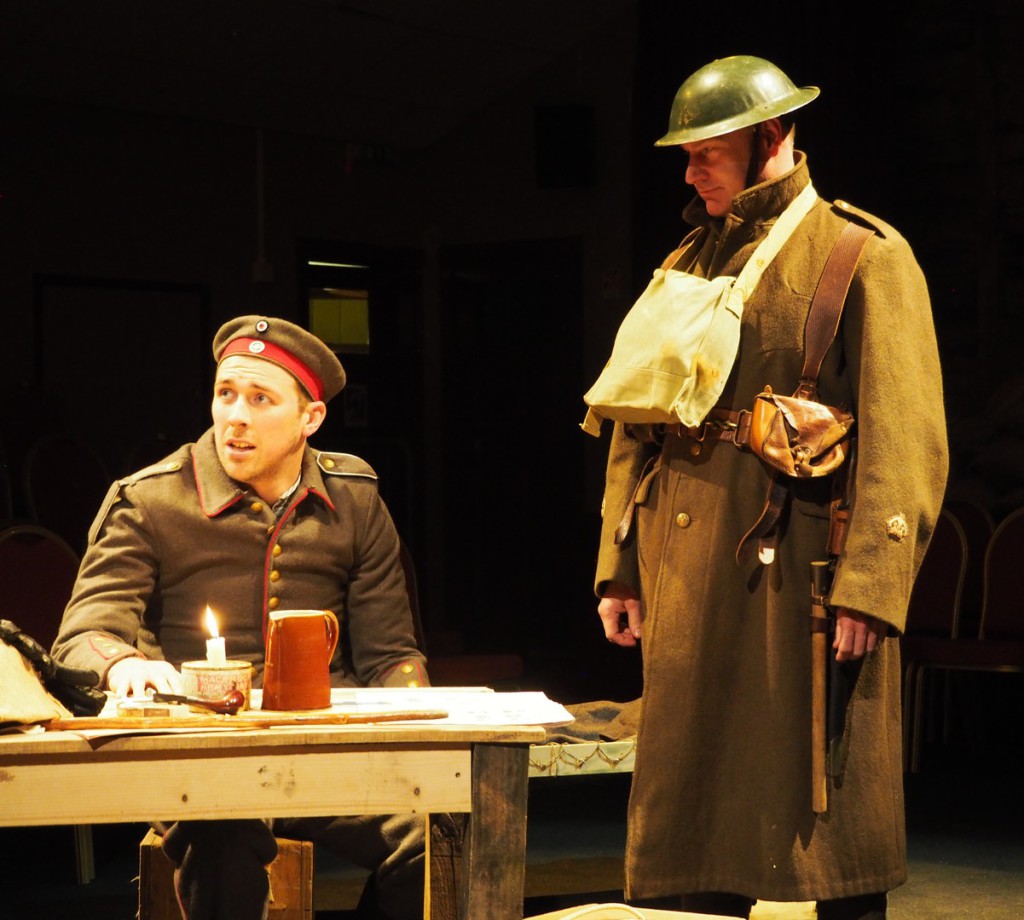 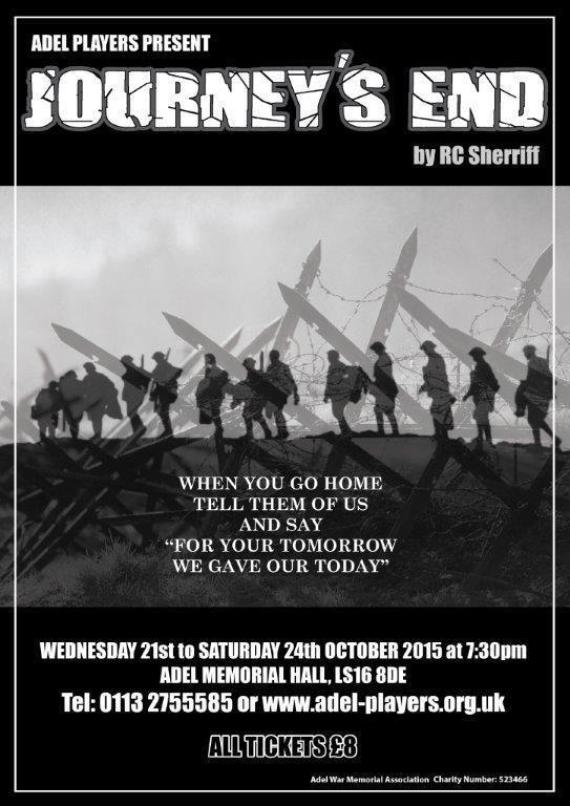 Here is just a selection of some of the spontaneous feedback kindly submitted by various audience members. Thank you for these comments. Do let us know what you think!

“Congratulations all round. I had seen the play at the Grand Theatre and was impressed with it then and wondered how you would be able to arrange it in the small Memorial Hall and convey the WW1 atmosphere.  But you all did and we are very lucky to have Adel Players here and on our doorstep”.

“Thanks for the play. All of us thoroughly enjoyed your production. Best yet! All actors were superb. We look forward to your next”.

“The play was extremely well done.  Bravo to Adel Players.  We were all very impressed.  The sound effects were such that if you closed your eyes you could think you were indeed in a war zone.  The props/scenery inside and outside the hall were very well done too”.

“What an excellent performance, the portrayal of the emotions was superb especially by such a young cast.   I went home feeling I had lived through it with them”.

“The lighting for Journey's End was, I thought, excellent. It was a very good plot, and I marvelled at how well every inch of the playing space was lit. Focus on the playing area was spot on (pardon the pun) and actors were lit perfectly throughout the show.”

“The standard of acting was what you would expect on stage in London”.

“I can’t imagine a better cast than the one you pulled together. Believable, life-like performances from start to finish. Massive applause to the hard working crew too - the often unsung heroes rose to the challenge again with an incredible set and design that worked so very well, along with perfect lighting and sound to immerse the audience into the trenches. It’s always exciting to see the technical developments occurring at Adel Players. I look forward to the next one!”

“This was a production of the highest professional standard.  The play was a tragedy, as all World War One plays must be, and the actors made it so.  They made us feel the agony they were going through as they knew that they faced death or worse at any moment.  Their diction was excellent and, as they spoke, their faces mirrored their feelings.  They were all quite splendid but perhaps it would not be out of place to mention one of the cast in particular – Captain Stanhope, played by James Willstrop.  He was on stage practically the whole time as the officer in charge and through his superb acting gave us an insight into the torment of having to make life and death decisions.  However, this did not overshadow the wonderful portrayals of the rest of the cast.  This was truly a night to remember."

Journey's End in the Blogosphere!

For a great blog site, and to see an excellent review from our own member, Shell Peart, please click this link: 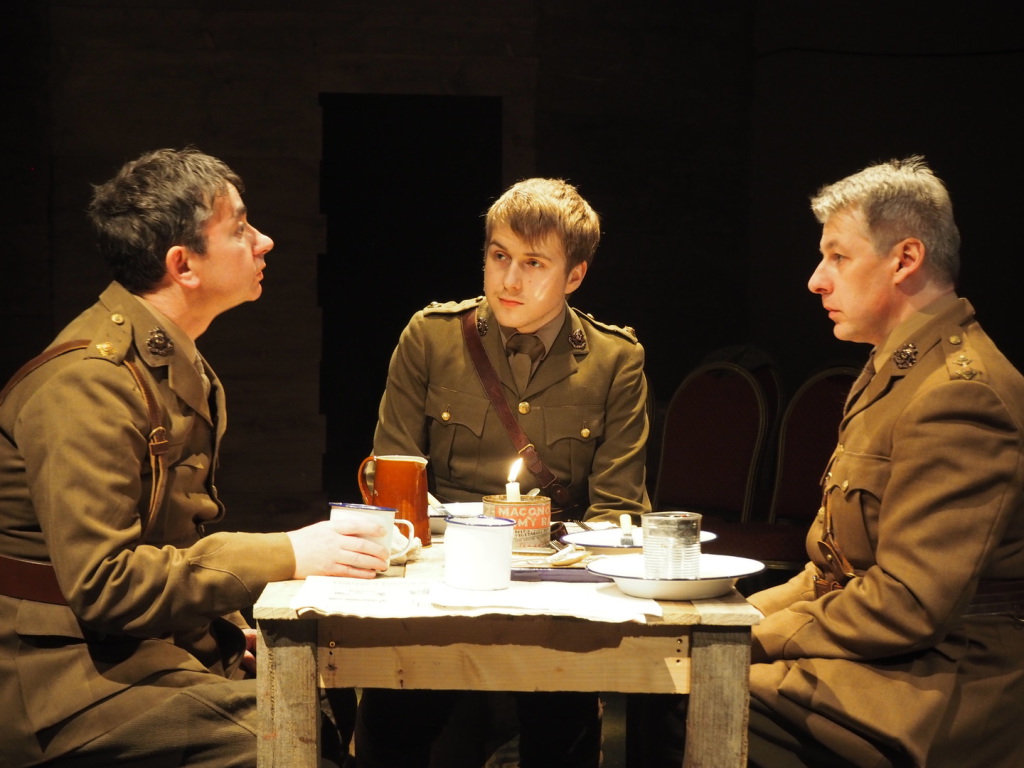 The sheer vitality of Adel players never ceases to amaze me.

Bernard Riley’s superb production of Journey’s End (1928), in which the dramatist R C Sherriff drew on his own experience in the trenches in the First World War, remains powerful, moving and emotionally devastating.

The action is all set in a dug-out on the front line in 1918 as the anxious British officers await a big German offensive. The characters are beautifully drawn, from the alcoholic Captain Stanhope (James Willstrop), a brilliant leader of men who only manages to calm his shredded nerves with prodigious quantities of Scotch, to the kindly middle-aged schoolmaster Lieutenant Osborne (Robert Colbeck) and the raw young new recruit Raleigh, (Will Andrews) who hero worshipped Stanhope when they were at school together.

The play’s mixture of humour, tension and old-fashioned English decency and understatement is beautifully caught in this production, and the performances are superb right through the ranks. The scene in which the schoolteacher and the new recruit heroically exchange small talk before a raiding party in which both know they are likely to die is as moving as anything on the London stage.

The first way that Adel players present this emotion is through realism. The set is immersive and carefully dressed. We have sounds, we have authentic costume, we have mud, we even have recruitment posters before we enter the theatre ‘in the round’. This proves vital in placing the audience in the play’s own time and space, and thus making it easier to believe in the characters.

The second thing they get right is the psychology. Through intelligent direction and some excellent performances it’s made clear to us that the stilted dialogue is a genuine defence mechanism. These men are definitely ‘in touch with their feelings’, and know what would happen to them and those around them if they allowed those feelings free reign.

Several performances stand out. James Willstrop plays Stanhope with admirable restraint and a reined-in control of pent-up fury that built the tension unbearably in the face of Raleigh’s uncomprehending disillusion. Having seen Willstrop in the previous Adel players production as a football manager’s son in ‘The Game’, this was a hugely different role and very well delivered indeed. Stanhope demanded courage and confidence, yet was so unsure of himself at times – a truly mesmerizing performance.

Humour was added by ‘chef’ Private Mason (David Pritchard) and contributed to the reality of what life in the trenches would have been like, shared by a variety of personalities, differing social classes and individual responses to the war.

The role of 2nd Lieutenant Hibbert was very well played by Matthew Newby, who expressed the sheer horror of the war and the real fear that many men must have faced. The cheerfulness of second lieutenant Trotter (Gavin Jones) also expressed a different face of war, and how others dealt with their daily lot.

The production was thoroughly absorbing, with no set change, but a superb visual experience of the trenches, and the sounds going off all around, The fact of reality on which the story was based make the unfolding drama and its final awful crescendo all the more powerful. You really began to understand the stress and pressure the soldiers were under, being in the trenches day after day. There were times when nothing was being said on stage as the characters sat and contemplated their possible fate - and the silence in the theatre just added to the tension.

The noise at the end as the battle commenced still could not portray what the troops endured - but it did bring it home as well as any drama could.
At the end, you wondered if you were applauding the actors or the soldiers who endured WWI - probably a mixture of both – but applaud we did.

Thank you to all involved in bringing this experience to us. Adel players have once again demonstrated their versatility in delivering a drama of high quality.  Their next play, running from Weds 20th to Sat 22 January is called ‘Situation Comedy’ and promises to be fast moving, full of laughs, one to blow away the winter blues! 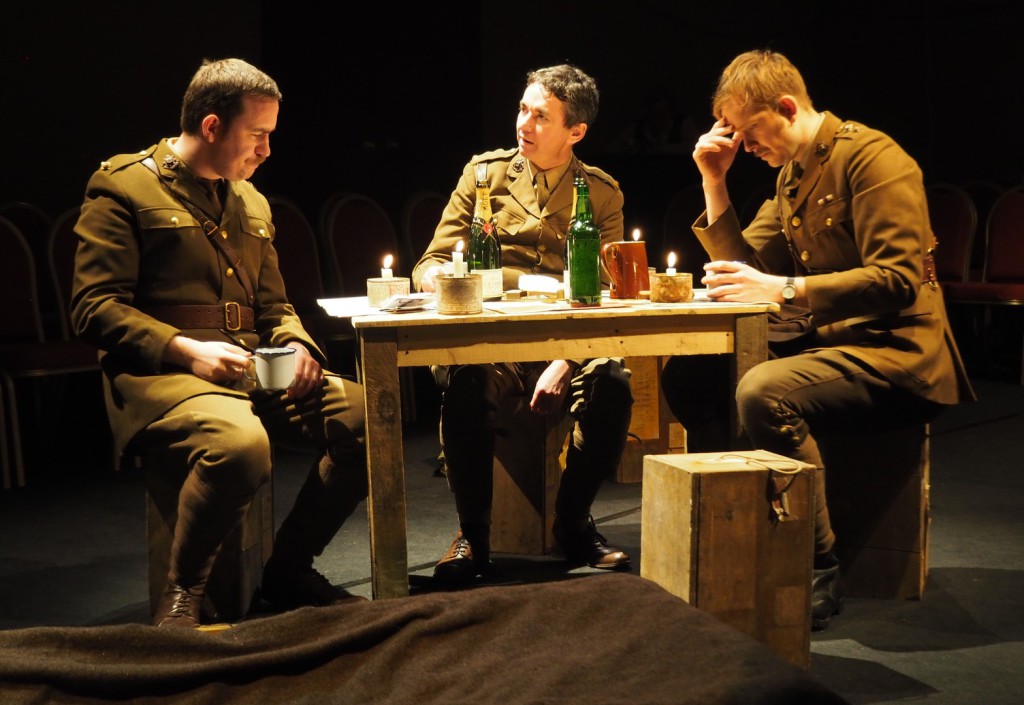 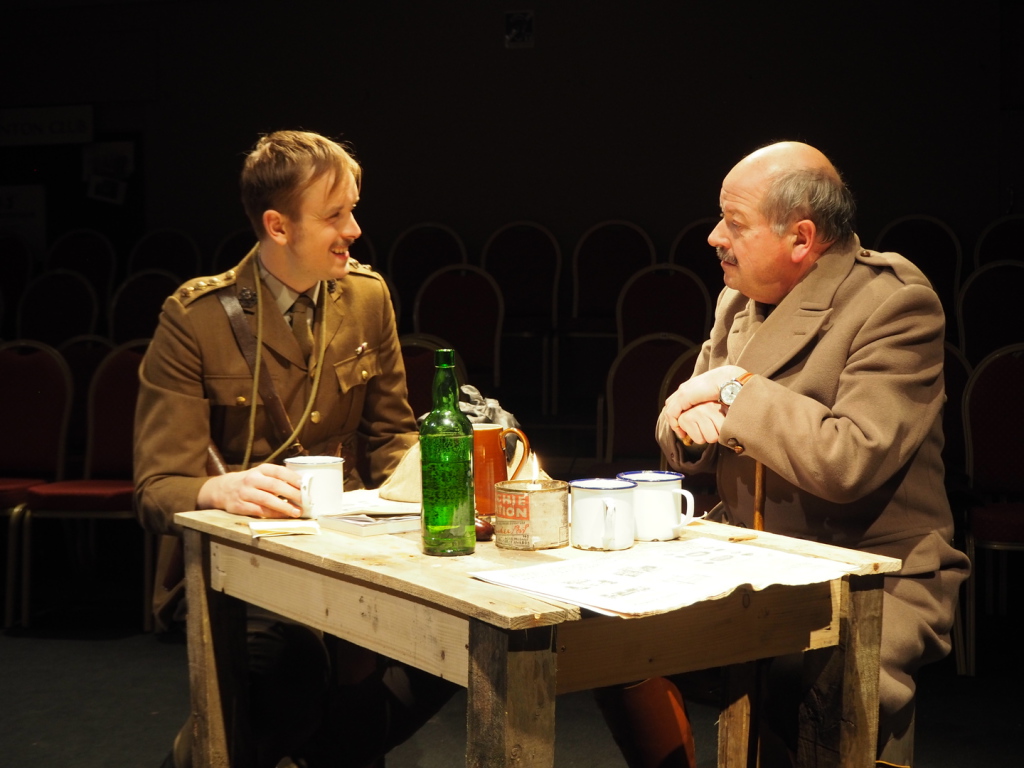 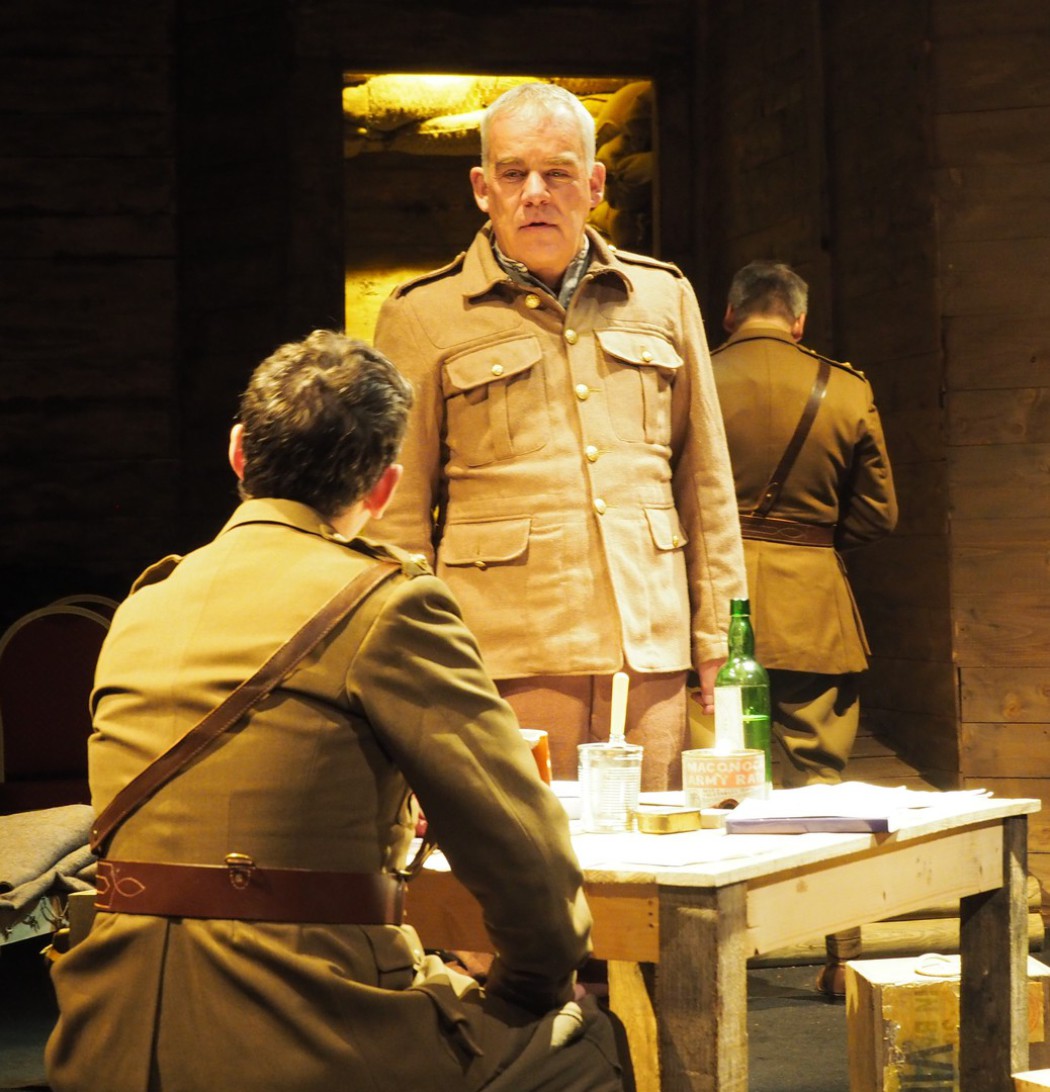 The author of Journey’s End, Robert Cecil Sherriff (1896-1975), a young insurance clerk, volunteered immediately war broke out in 1914, but to his astonishment he was at first refused officer training because he had not attended public school. However, it was not long before the high numbers of officer casualties forced the authorities to re-think their elitist recruitment policies and Sherriff as an ex-grammar schoolboy was then accepted. He did his officer training in 1915 in the Artists Rifles and was commissioned in 1916 as a 2nd Lieutenant in the 9th (Service) Battalion of the East Surrey Regiment, where he joined “C” Company. By that time the 9th East Surreys had already twice suffered huge casualties, and when he was sent out to France Sherriff was part of a third wave of replacement troops for this battalion. Sherriff’s active service at the Front lasted ten months, and it included a terrifying stint in the Vimy Ridge sector. During the July 1917 battle of Passchendaele he was wounded in the face, right arm and hand, was returned to England to recuperate, and was never sent back to the Front.

However, he continued to serve, and by the time he was demobilised in 1919 he had been promoted to Captain. Sherriff maintained a lifelong loyalty to the 9th East Surreys and when he wrote Journey’s End it was in homage to his comrades, especially to those who had continued to serve at the Front after he had been wounded and sent home. He said of the play that writing the dialogue had been easy because he had “just had to write down what people had said”, and that the characters “had just walked into the play uninvited”.

Journey’s End is set in the four days leading up to the opening of Operation Michael, the mighty German spring offensive which was aimed at finally knocking out the British army and winning the war before the build-up of American troops altered the balance of power. On 21 March 1918 the greatest artillery barrage of the whole war took place and over a million shells were fired on British lines in the space of five hours, injuring or killing 38,000 men. Despite this the 9th East Surreys held their position for several days as ordered and, when they finally surrendered, it was because they could fight no longer – they were isolated and had run out of ammunition. Out of the 500 men in the battalion at the start of Operation Michael, only some 40 were left.

Journey’s End was spectacularly successful when first performed in 1928 and has continued to be popular with audiences ever since. Following this Sherriff went on to become a very successful author of film scripts, writing the screenplays for The Invisible Man, Goodbye Mr Chips,The Four Feathers, Odd Man Out, and The Dam Busters. Journey’s End is in many ways a docu-drama, though written before this was a recognised genre. As his own words in his autobiography make clear, Sherriff’s intention was not to deliver a political message but simply to show audiences what life at the Front in the First World War had really been like. Journey’s End is about ordinary men doing their best when caught up in international events beyond their control, and we are privileged to tell their story in this play which in 1928 Winston Churchill hailed as “living history”.