By Frank Vosper, adapted and directed by Pat and Bernard Riley 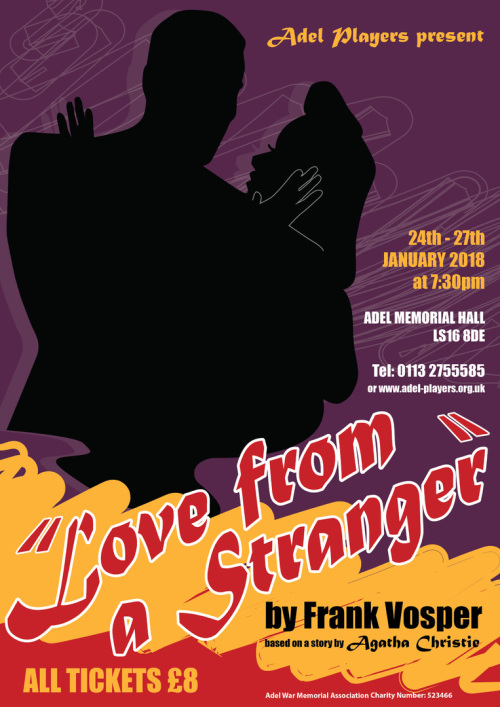 Our January production, Love from a Stranger, proved very popular indeed and as always we are very grateful to our loyal audience members for supporting the show. More than 500 of you came to see the play over its four night run and we are very appreciative of the kind comments we received. As usual we are posting here some production pictures and these will be joined by reviews and audience reactions as we get them. First, here's what our directors said about it:

70 years ago Adel Players came into being as a section of Adel War Memorial Association and to celebrate this milestone we have decided to present again one of the plays we performed in our very first season.  This is “Love From A Stranger”, a rivetting 1930s psychological thriller based on a tale by Agatha Christie.  And guess what?  We’ve beaten the professional theatre to it - there’s a national tour of this very same 1936 play planned for later in 2018!

Cecily Harrington, a hard-up shorthand-typist, wins a large sum of money in a sweepstake.  Excited by her new-found wealth she breaks off her longstanding engagement to her loyal but unimaginative fiancé so she can realise her dreams to travel the world.  However her plans quickly change when she meets Bruce Lovell, a charming American, and after a whirlwind romance she marries him.  Life in their picturesque country cottage seems idyllic, but is Bruce all he seems?   Why will he allow no-one to go down into the cellar that he uses as a dark room? 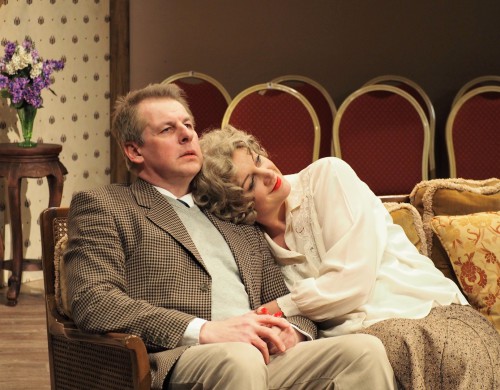 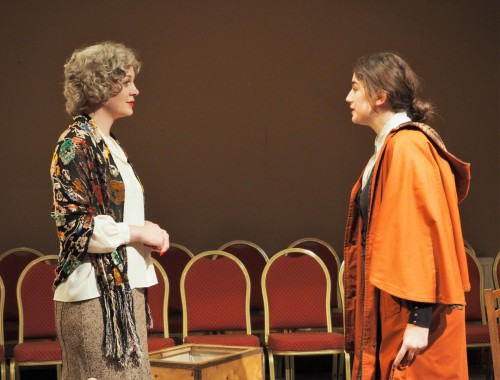 Jane with Neve Carey as Ethel 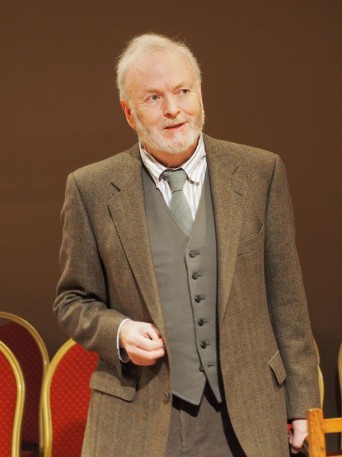 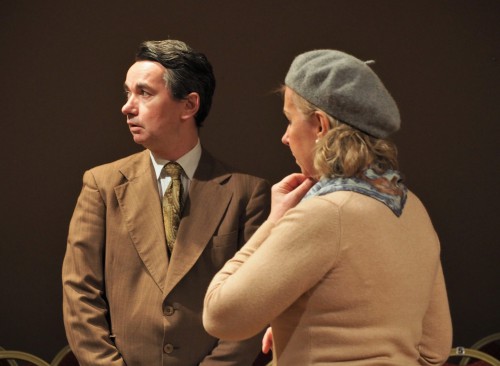 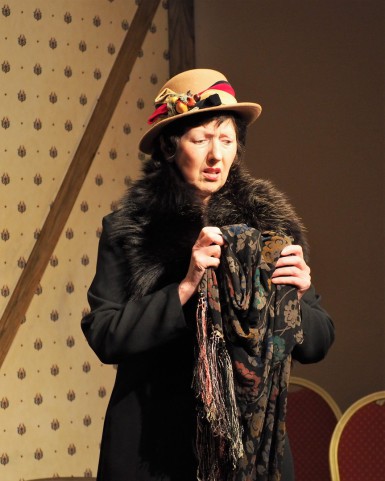 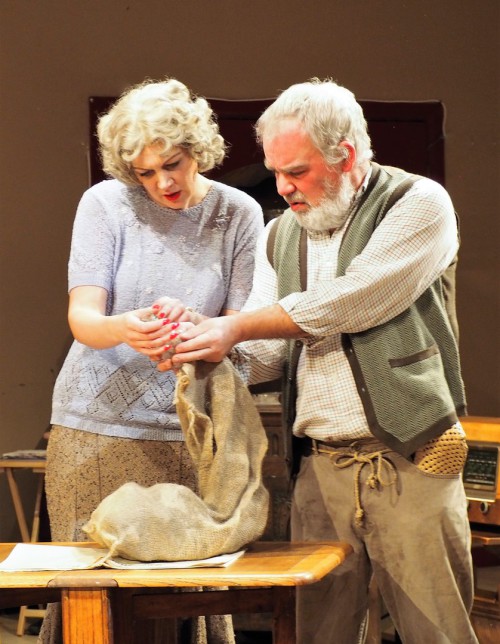 Jane with David Pritchard as Hodgson

Programme for "Love from a Stranger"

Review of "Love from a Stranger"

Our thanks go to Donna Shoesmith-Evans for this review of our production which is to be published in "Adel Bells":

As we are now well into 2018, what better way to spend a dark January evening than with the Adel Players and their production of ‘Love from a Stranger’ (written by Frank Vosper, based on a story by Agatha Christie). Originally performed by the Adel Players in 1947, it was specifically chosen to mark the 70th anniversary of the Players.

A whirlwind romance with a handsome and charming stranger Bruce Lovell, (played menacingly by Robert Colbeck) sweeps Cecily Harrington (Jane Gorton) off her feet.  We see her recklessly abandon her old life with a whirlwind marriage to then settle in the remote and blissful surroundings of an isolated country cottage, bought with her large winnings from a sweepstake.

However, her newfound love is not all that it seems and as Agatha Christie herself said, ‘“Where large sums of money are concerned, it is advisable to trust nobody.’’  Her friend, Mavis reminds her of this, as does her Aunt Louise and former fiancé Nigel. Bruce seems to have an intense interest in his dark room in the cellar with his photographs and lots of H2O2 (hydrogen peroxide) which he states is not to colour his hair!   So what does he have in mind to do with it?

The idyllic cottage has its own staff including gardener Hodgson who adds comedy as well as plot development.   Ethel, the housemaid, adds further humour and is well characterised, gaining the confidence and trust of Cecily.  Doctor Gribble completes the village scene and supports Bruce’s health needs, as well as sharing his passion for reading about legal crime cases.

Performed in the round, 1930’s music, costume and set all add to the sense of time and place, in an unforgettable production.  Suspense filled, the performance held our interest and imagination until the very end, where there was a shocking twist in the tail! 2018 is already being referred to as ‘Year of the Woman’, which seems very appropriate after watching this performance!

The next Adel Players production will be ‘Accolade’ by Emlyn Williams, described as a gripping, timeless play which explores the ripple effect of a public scandal on the private lives of family and friends.  Please contact Donna via e-mail – stdonna@talk21.com if you would like to join our group who will be at the production on Friday 27 April.

Audience reactions to "Love from a Stranger"

Thanks as always to our patrons for these appreciative comments:

“Thank you to all concerned for providing another excellent play on Saturday night. As an avid fan of Agatha Christie, having acquired all her books over many years and seeing The Mousetrap in London on honeymoon in 1964, I anticipated the great night that it turned out to be. In the bar we managed to convey our enjoyment to Robert Colbeck … but wanted everyone else involved to know how much we appreciated all their efforts.”

“Enjoyed the play last night - especially the second half, an unexpected but "happy"? ending.  The costumes were wonderful - I coveted the beautiful, short-sleeved top!”

“We came to see "Love from a Stranger" on Saturday evening and enjoyed everything about it!”

“I don't know how you all do it but last night's production of 'Love from a Stranger' was excellent - very dramatic with some outstanding acting.  Well done to everyone both on stage and behind the scenes.  We all feel very lucky to have Adel Players here.  No wonder you sell out.” 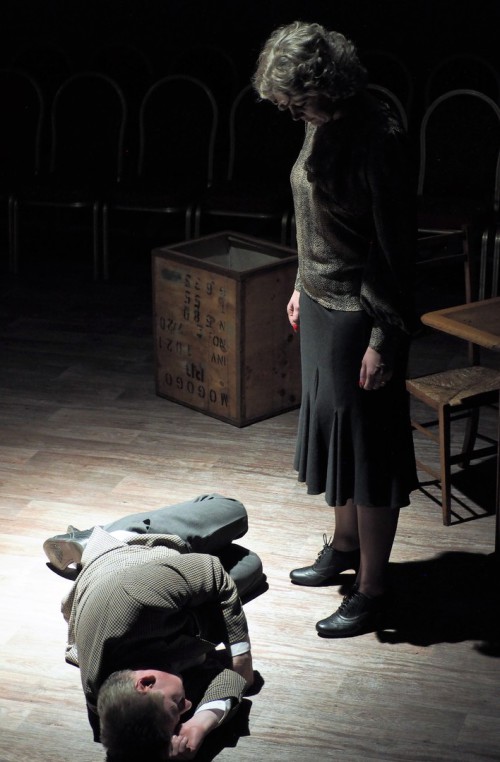 Finale, Love from a Stranger