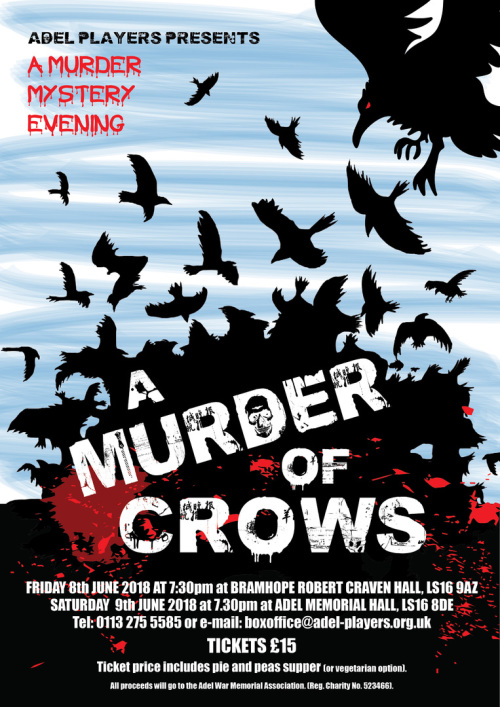 A huge thank you to all those who came along to our Murder Mystery, performed at Bramhope and AWMA on the 8th and 9th June 2018, and to all those involved in the production for making it such a success. Particular thanks must go to Pat Riley for writing this year's script and to Mike Andrews for his sterling efforts as both director and compere. Between the two performances, just short of £2,500 was raised to support AWMA and our ambitious plans to improve our auditorium and other facilities. Thanks for your support, and we look forward to seeing you next year!

14 years ago Lizzie, the eldest daughter of Colonel Charles Crowe and his wife Julia, disappeared from the family home at Adel Manor, leaving her parents to care for her baby son Jack.  Nothing has been heard from her since but the Colonel clings to the belief that she will one day return and he insists every year that they must celebrate her birthday.  This obsession with Lizzie is bitterly resented by the rest of the family, especially Lizzie’s son Jack, who is deeply hurt by his mother’s desertion of him when he was just a few months old.  Tensions within the family come to a head when a handbag and suitcase belonging to Lizzie are found at Adel Dam Nature Reserve, and the case changes from that of a missing person to a possible case of murder.

Lizzie was beautiful and talented: were her family and friends as close to her as they say, or was she surrounded by envy and hatred?  After 14 years the truth will out.  Detective Inspector Samuel Hainsworth and community WPC Jemina Relampago are investigating!

Our thanks go to Ann Lightman for this review of our latest Murder mystery:

I attended the Bramhope first night and had a great evening. Both the Bramhope and Adel events were sold out. After paying for the reserved ticket and buying raffle tickets, I found a seat at a table with two people I already knew and we were joined by another three. Our table worked in two groups to complete the two paper quizzes we found on the table. One was a picture quiz of TV detectives - I hadn’t realised there were so many! As one on the table never watched crime fiction and another two had spent most of their lives in the USA, the onus was on the three eldest, me included! It was hilarious – if we recognised the face, we might just get the actors name or the series – getting the first and second name of the detective (a point for each) certainly was a challenge! Credit to our oldest team member who came up with the surname Stanhope for Vera. non-TV person beavered away at the crime question sheet, e.g. which debtors’ prison did Charles Dickens father spend time in? (Marshalsea). A girl murdered in 1867 gave rise to what common phrase? (Sweet Fanny Adams).   If we didn’t get the answers, we were interested in finding them out!

Then – lights- action – and the compere Mike Andrews appeared on stage, dressed in black with a bow tie … as befitting a crow! The play, written by Pat Riley, our local playwright and author, started and we were soon introduced to the Crowe family of Adel Manor! The audience really appreciated the local setting – with the X84 bus service! We learned that a daughter of the family disappeared leaving her baby son behind …but then items turn up in the vicinity of Breary Dam following some restoration work (very topical!), the Police come, investigate further, discover human remains and a murder investigation is launched. End of Act One – and everyone could possibly be a suspect except Jack who was then a baby and probably his aunt who would have been just 14. It still left four suspects most of whom had motives. As befits a good murder mystery, it isn’t that straight forward!

Over a delicious pie and peas (or a vegetarian option) supper, the pros and cons of various suspects were debated – and the killer mentioned as a possibility. The majority decision was (of course) wrong, but not embarrassingly so as we had been pretty sure the true killer conspired in a cover-up. The results of the paper quizzes were also read out. Are mobile phones replacing fading memories we wondered? Our table didn’t win though we were surprised and proud of what we did achieve by putting our heads together. The raffle was then drawn - the money raised was going towards paying for the new roof on the venue that night the Bramhope Village Hall. We then sat back and watched the Finale, in which the true killer was revealed, together with the clues which led to us being able (or not) to detect the person. There was a wonderful twist in the ending, which the audience loved! After the murderer confessed, the police officer managed to get a word in and say that the bones were pre-historic! But she was still arrested as by now she had killed her husband too!

It was a great evening. The cast were terrific – and special mention must be made of the youngest, Harry Peart, who had one of the major roles, leading the opening scene! He lived up to the high standards always reached by Adel Players. Anne Mark too had a huge role, especially in the final scene… but they were not alone and it was good to see a number of players we have grown familiar with on stage plus some less familiar. It’s not the first time I’ve commented on how lucky we are in Adel (and now Bramhope) to have such a large, talented and enthusiastic company covering such a range of ages. Our credulity is never stretched by the casting and we are never allowed to get bored. Brilliant!