Our last production for 2017, Murdered to Death, finished a hugely successful run on 21 October, playing to sell-out audiences for the last three nights and with more than five hundred audience members in total enjoying the fun.

Look out here for production pictures along with reviews and audience reactions. Thanks as always to our loyal patrons for making this such a success. (And the director, actors and backstage crew: they weren't half bad either!) 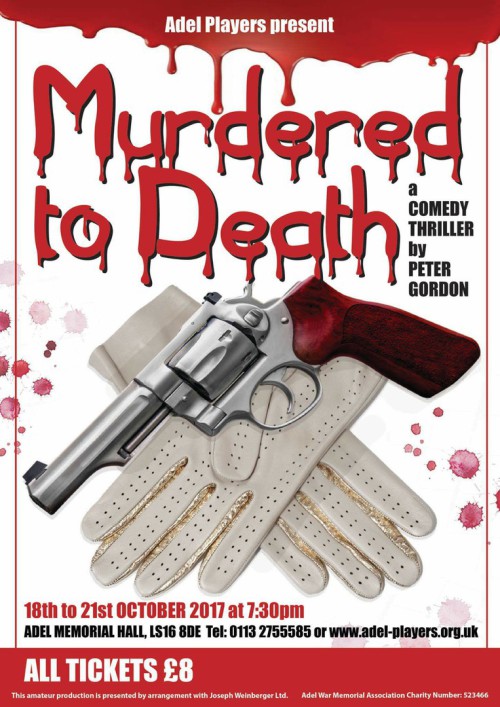 Production Pictures for "Murdered to Death"

Our thanks to members Tony Zigmond and Shell Peart for contributing to this wonderful record of the show. 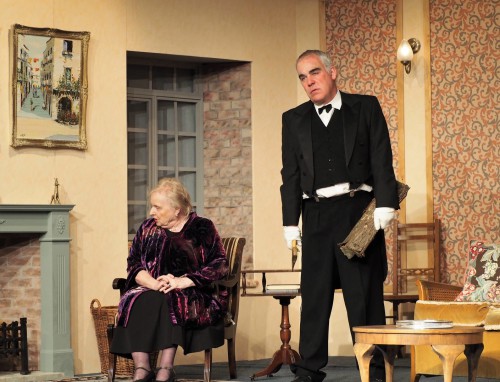 Pat Riley (as Mildred) and David Pritchard (as Bunting) 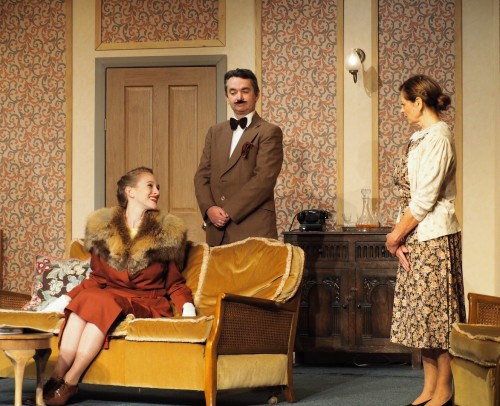 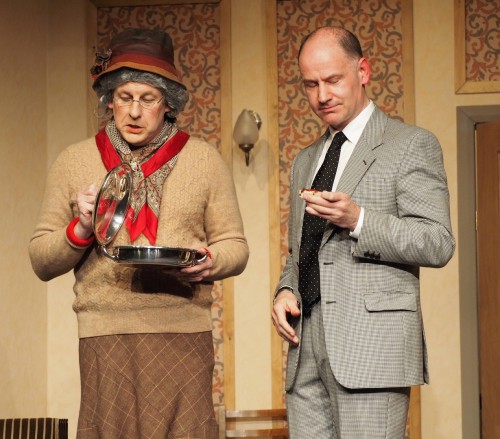 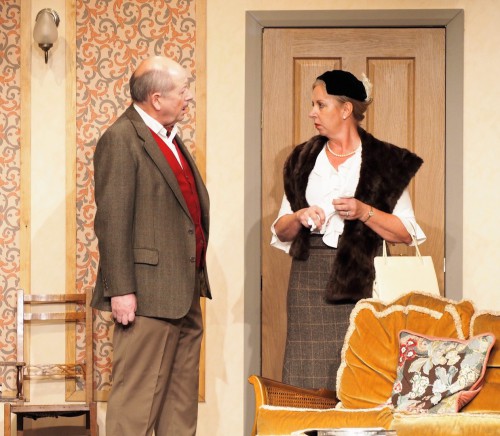 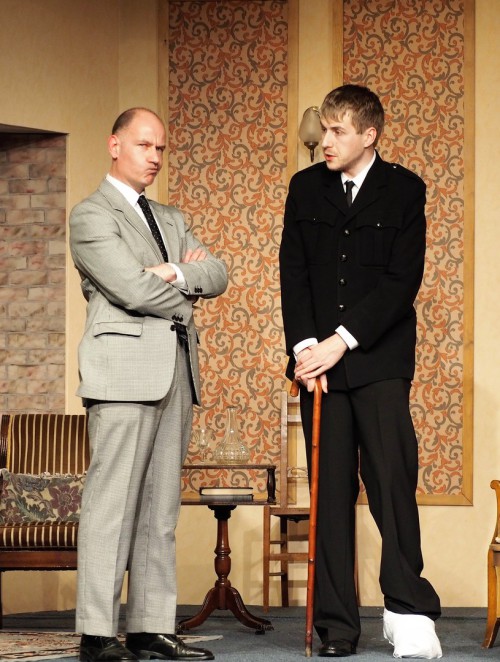 David L with Will Andrews (as Constable Thompkins)

Review of "Murdered to Death" from Adel Bells

Our thanks to Ann Lightman for this appreciative review of our last production, Murdered to Death:

Billed as a comedy thriller by Peter Gordon, the emphasis was very much on the comedy. Such a variety - hilarious word play (the loop system must have been appreciated), physical – the Police Inspector did a couple of falls that were spectacular, slapstick – e.g. the cream on the end of the nose, the walks; visual – the butler with axe, innuendo (not very PC but still funny to an older audience). I, and the rest of the audience, laughed a lot.

I suspect it would be quite difficult to do this play well – the timing must be immaculate and the actors had to deliver their lines with aplomb and straight faces – quite a challenge especially with so many malapropisms. “Casting nasturtiums”, the servant a “faithful container”, being “illuminated from the enquiry” were just a few. Naturally the cast of Adel Players achieved this seemingly effortlessly!

All ten characters were played with flair so it is unfair to single out any particular performance. Nonetheless I will say that Robert Colbeck’s first public performance (to my knowledge) as a woman (Miss Joan Maple) was a complete masterpiece, the face, the nervous hand movements – smoothing “her” skirt, tapping her fingers, the voice, the knitting – all wonderful. Especially the knitting – quite difficult to concentrate on that and remember the lines!

His performance was more-or-less matched by all those around him, playing such different roles recognisable as Agatha Christie characters – the retired army colonel, the shady art dealer, the inept (understatement!) Police inspector, the alcoholic butler (how was that “alcoholic flush” obtained? I worried that I might be witnessing a heart attack!). The women had marginally more normal roles as did the young Constable, but in comedic terms their roles were essential as the traditional “comedy straight man” – or in many cases here, women, which included two new to the Players. The effect of the dazzling mysterious visitor on the men was predictable and very funny!

I must congratulate the wardrobe for recreating 1930’s with breath-taking elegance. The clothes were enhanced by the make-up, hair styling… so evocative of the era. The play moved at a rapid pace which was helped by just one set being necessary – that of the spacious lounge.

To summarise, a wonderfully funny production staged to professional standards! We are just so lucky in Adel to have such a high calibre theatre group that works hard to provide such a wonderful and varied programme – of three performances a year plus the murder mystery.

Programme for "Murdered to Death"

Audience reactions to "Murdered to Death"

Here are some of the lovely comments we have had from patrons following the last play:

“Loved the production. Very impressed with the sound quality and the lighting rig.  Great cast, with a special mention for David Lancaster…very funny as the Inspector!”

“I had an amazing time, you were all so good, my friend loved it and said that the actors, and the production were amazing to be an amateur group...”

“We loved it! Hilarious show.”

“…our sincere thanks to all concerned, including the support team, for a superbly enjoyable evening last Thursday.  All in our group thoroughly enjoyed the play.

The character acting and the direction were truly excellent.  I hope you have had many similar plaudits from others.”

And our thanks to John Hartley for the following appreciation:

Dianne Newby the Director explained that Comedy is a serious business if it is to be played successfully. Some of you may remember the Morecambe and Wise sketch with Andre Previn which illustrates Dianne’s point nicely; not a single giggle or smile from the characters in an hilarious episode.

The setting was a country Manor House in the 1930s. 'The guests had come

to spend the weekend with the widowed Mildred and her niece Dorothy. The characters gave plenty of scope for suspicion and hilarity:  Colonel Craddock and Margaret his wife; a glamorous aristocrat, Elizabeth Hartley-Trumpington; Pierre, a crooked, art dealer and Miss Joan “Maple” (get it) who attracts murders like ducks to water. Bunting, a discourteous, alchoholic Butler completes this motley crew.

Thanks to the presence of Miss “Maple” the inevitable murder occurs. The totally incompetent Inspector Pratt doesn’t just jump to conclusions he positively leaps to them. His loyal assistant the “put upon” Constable Thompkins tries his best to bring some order but is overwhelmed by the chaos and total confusion not helped by the Inspector’s malapropisms.

It is a wonderful script which develops the characters, faults and all, and provides rich grounds for comedy with misunderstanding and clever word play, or misuse it. It was clear to me that the Adel Players have developed a great team spirit and this was evident in their performances. This was confirmed by Dianne who said that it was a delight to direct and she very much enjoyed rehearsing it.

All very well but what did the audience make of it?  A couple of quotes make the point “I really enjoyed it, it was wonderful” and “I absolutely loved it”. As we left the Hall you could hear the chuckling and laughter as folk made their way home. Thank you Adel Players for giving us a great night out.