'Congratulations to everyone involved with Relatively Speaking - outstanding entertainment! Loved the 60s setting and the performances from your 'fab four' were truly groovy ;)' 'Still giggling after an amazing performance last night by Adel Players! Just the right mix of confusion, debauchery, and hilarity - well done guys!'

'Thank you, thank you, thank you!' We were delighted that a couple who saw the 1st production of 'Relatively Speaking' at the Library Theatre in Scarborough, 1965 (directed by Stephen Joseph himself) were able to join us- and even more so that they thoroughly enjoyed our production!

Written in 1965, Relatively Speaking was originally conceived when Scarborough’s late great Stephen Joseph asked Ayckbourn to write a play which would simply make people laugh - especially when their seaside summer holidays were spoiled by the rain and they came into the theatre to get dry before trudging back to their landladies!

Thankfully, the predictable English climate brought plenty of customers into the Library Theatre in Scarborough for the World Premiere in July 1965. At the London Premiere two years later it enjoyed rave reviews and launched Ayckbourn as one of the most prolific and popular writers of comedy drama in the modern era. Between 1970 and 2000 there was at least one and sometimes as many as five Ayckbourn plays being performed every year in London's West End. In 2013 Relatively Speaking enjoyed its London revival after 46 years!

The setting is the "Swinging 60s" when Britain was in the grip of a cultural & pop revolution with 'Beatle mania' at its height. The first baby boomers were coming of age and with them a new generation of adults were free to escape the past.  Against this background, Relatively Speaking is a comedy about relationships, infidelity and misunderstandings where Ayckbourn fully exposes the genteel politeness of the British middle class. He was able to do this thanks largely to the imprecision of the English language and the peculiar reticence endemic to British culture, which encourages the sort of mistaken-identity plotting Ayckbourn has mastered, and which leaves largely unspoken the painful truths of his characters' lives.

Very much reflecting the times, Ginny is a young woman with a very busy love life.   Greg wants to marry her but there are complications. When Greg tries to seek the approval of Ginny’s parents, he sets in motion a train of misunderstandings that create the comic bedrock of this hilarious play. 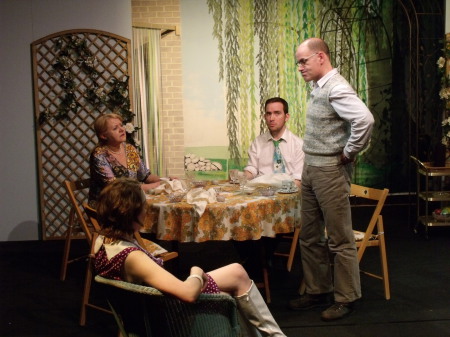 Just who do you think you are...

The gloom of a cold dark January was lifted by an Adel Players production of Alan Ayckbourn’s “Relatively Speaking”. I would imagine it was a challenging play for the cast of four – fast-paced, almost entirely verbal humour, split pretty equally between two young actors – Helen Duce and Matthew Newby and two from the generation above, Dianne Newby and David Lancaster. All were faultless and convincing in their characters...no mean feat with such a lot to memorise. We are just so lucky that Adel Players have people capable of this professionalism –especially the younger actors, for the sake of authenticity in this play but also for the future of the Players.

The play was performed “in the round” which adds to the intimacy and must resolve any problems re seeing and hearing the play (and there is a loop system in operation). This had an unexpected bonus for me in that there was just one major scenery change – which one could watch and it was fascinating to see quite how many people (many recognisable from previous productions/front of house etc) were involved...something that goes unnoticed if behind a curtain. This reinforced just how much care had gone into the staging – we were immediately back to the “Swinging Sixties” with a Beatles soundtrack, lurid floral duvet cover, micro-mini- skirt and white boots. Most of the audience were on a nostalgia trip straight away – well O.K. I certainly was! Congratulations to Director, Beth Duce and a large and very capable team.

The title made sense – in retrospect at least, as this play was based on mistaken identities amongst the cast, but with the audience coming pretty quickly to realise the true situation, leading to much hilarity. It was in effect a farce, but without a lot of physical humour which that implies. Based in the Sixties, it didn’t feel particularly dated to me at least, though perhaps times have changed a little since then! All in all a fun, enjoyable evening which just flew by especially in the second half by which time the characters had been established and one could just enjoy the comedy. 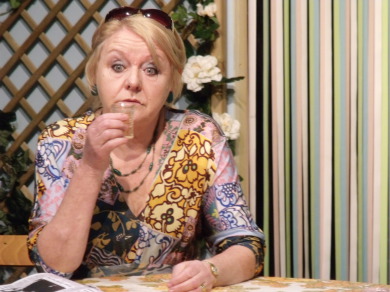 Sheila takes a sip to clear the mind... 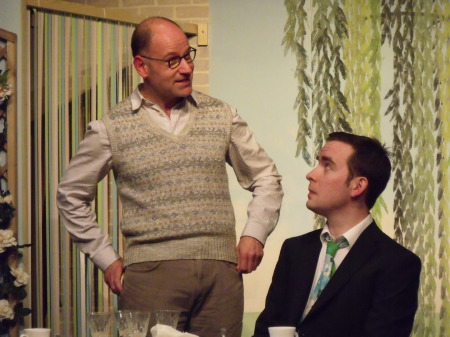 You want to marry my wife, do you?