Spirit Level drew an audience of just shy of 500 in total over the four nights and as always, we are very grateful to all our loyal patrons for their continued support. "Excellent, definitely worth going, haven’t enjoyed myself so much in months..." was typical of audience reactions and it was nice also to get the following feedback: Just wanted to congratulate Pat on a wonderful performance last night. Did not realise she was “starring” in it until we got the programme! We both loved the play too. We needed a good laugh… it was a very funny play and of course superbly acted by all. Good to see some talented newcomers too".

As usual pictures, reviews and other audience reactions are posted below. 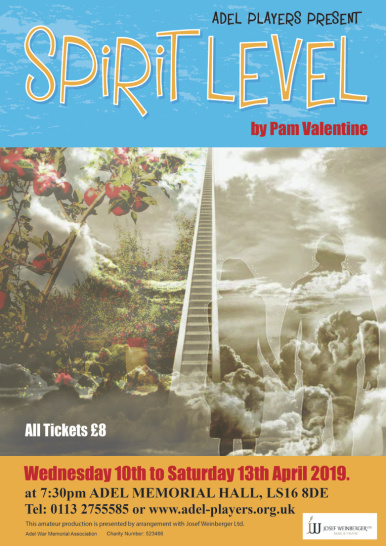 Our thanks once again to Tony Zigmond for the equipment and expertise that contributed to this lovely record of the show. 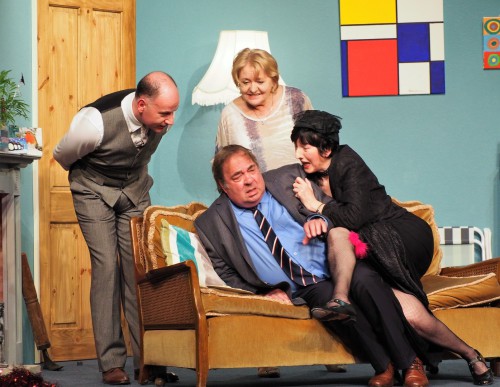 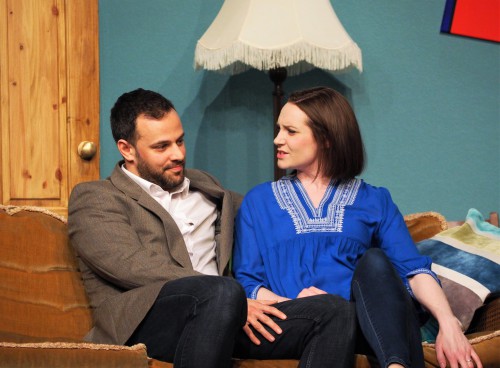 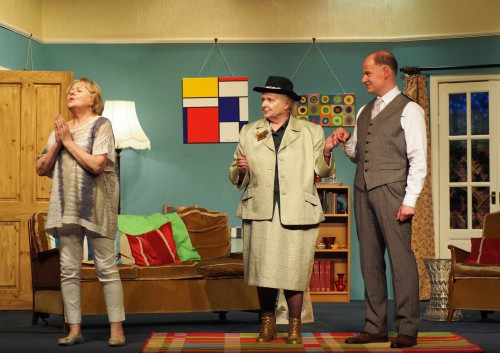 Dianne and David with Pat Riley (as the Guardian Angel)

And not to forget the set...

First produced in 2010, our third play of the season was a light comedy with a strong streak of fantasy and moments of classic farce. Jack and Susie Cameron drowned in a boating accident while on a holiday in the Italian Lakes. They now haunt their old cottage, staving off boredom by tormenting the local estate agent and the various tenants who rarely stay long. Then a young couple arrives and Jack and Susie decide that they really quite like them and start to get involved in their lives.

Director, Alan Foale, told us before the show: “Spirit Level is a light comedy about couples young and old and the strange ways in which human relationships develop. It is indeed a play to lift your spirits. I was enchanted when I first read the play and it was so fresh that it held my attention throughout, as well as making me laugh out loud! And it left me to reflect on human nature without ever feeling that someone was lecturing me”.

Our thanks to John Hartley for this review of the production which will appear shortly in "Adel Bells":

The story is about two couples, one young the other more mature. Indeed the older couple both died in a boating accident and have returned to their former home, as ...er Ghosts. The younger couple take up renting the same house.

The plot offered plenty of scope for mischief as the ghosts, unseen by humans, move objects around to the confusion, annoyance and bewilderment of the other people in the story. Apart from the wit and laughs, the play drew out some pathos as the older couple reflected on their lives together and missed opportunities through lack of communication.

David Lancaster and Dianne Newby , both experienced and talented actors, played their ghostly roles with their usual professionalism. It was encouraging to see two new players Laura Romanowski and Bardia Ahmadi taking on the parts of the young couple. Both gave sparkling and lively performances which complemented the others perfectly.

There were three superb cameo roles. Janet Porter played the formidable and staid Mother-in-Law who was led by the ghosts unbeknownst into a compromising situation with the local Estate Agent. Owen Cary Jones as the Estate Agent also suffered at the hands of the mischievous couple. His anxiety and agitation increased whilst the story unfolded as he began to doubt his own eyes when things moved around with no logical explanation. Pat Riley was the sympathetic Guardian Angel, complete with mobile ‘phone, who added a lovely, light touch to the proceedings. A shout out here for the Sound Department. Not only did they set the appropriate mood music for the play

but they also produced some great ring tones which drew laughs of approval from the audience.

Director Alan Foale told me that one of the challenges in this play was to ensure that the ghosts did not bump into the humans during some of the faster moving scenes. The location of the play was set in a cottage in Yorkshire Dales and this was to accommodate the different generations involved. He is a great fan of Pam Valentine’s work and consequently had an enjoyable experience directing a great team.

I sought out members of the audience for feedback. Comments included “Very funny”, “Enjoyable” and my favourite “Uplifting”.

Well done Adel Players for another successful Play much appreciated by the audience.