"Time of My Life" closes after sell-out performances!

Our production of "Time of My Life" closed on 27 October 2018 after attracting capacity audiences totalling more than 570 over the four nights of the show. A huge thanks as always to all those who supported us by coming along and of course to the team, backstage and front of stage, who brought it all together. As usual, please find below some pictures of the production and we will also post audience reactions and reviews as they come in. 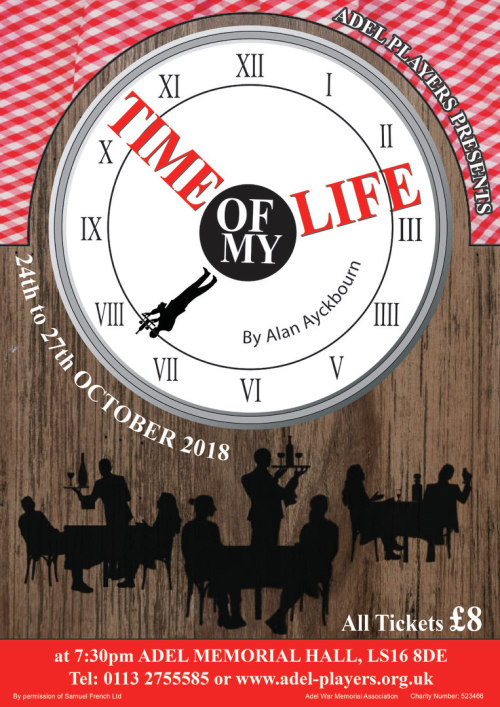 Adel Players started their 2018-2019 season with an Ayckbourn comedy, Time of My Life, performed at Adel Memorial Hall from 24-27 October. Set during the recession of the early 1990s this is that rarity, a specifically northern Ayckbourn play, one with Yorkshire patterns of speech, plain speaking and blunt humour.  It is all the funnier for being so close to home, though the behaviour and foibles are universal.

Master craftsman Ayckbourn begins the story in the present but, as the tale unfolds, he moves the action back to the past and onwards to the future.  Time of My Life is an observational comedy which, as is often the case with Ayckbourn, has a dark side.  The action takes place in a family-run restaurant which could be Greek, Italian, Turkish, French …..

Gerry, a bluff no nonsense businessman, is seated at one of the larger tables with his wife Laura, ready to celebrate her birthday with the family.  It is 10 pm on Saturday the 18th of January.  The couple are soon joined by their elder son Glyn and his wife Stephanie, and their younger son Adam and his new girlfriend Maureen.  Against the backdrop of business problems caused by the recession it is not long before family and marital conflicts emerge.  At one of the smaller tables Glyn and Stephanie play out two years of their lives in the future, while at the other Adam and Maureen play out the previous two months from their first date to the night of Laura’s birthday, after which life for all of them will change forever. 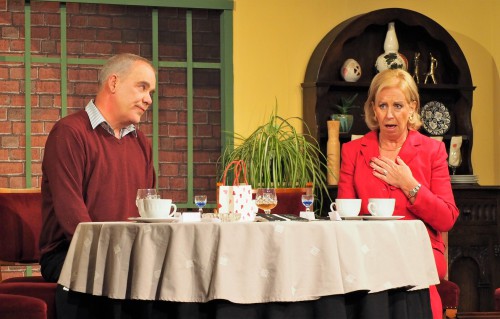 David Pritchard (as Gerry) and Anne Barrowman (as Laura) 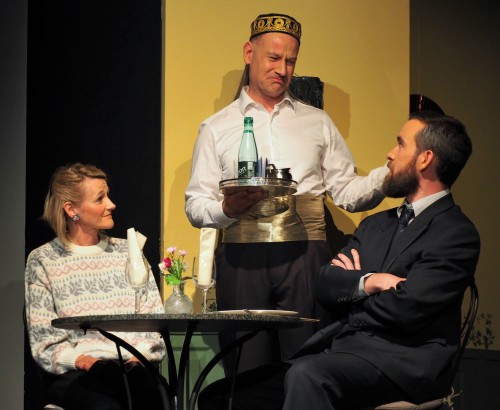 Amanda Ashby (as Stephanie), David Lancaster (as Calvinu) and Matthew Newby (as Glynn) 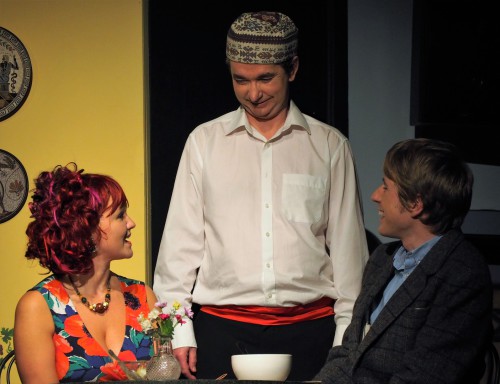 Leanne Cross (as Maureen), Gavin Jones (as Aggi) and Will Andrews (as Adam) 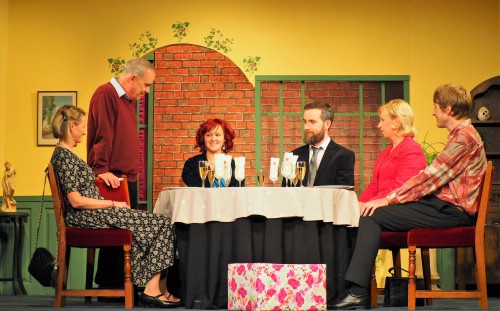 The Stratton family and friends 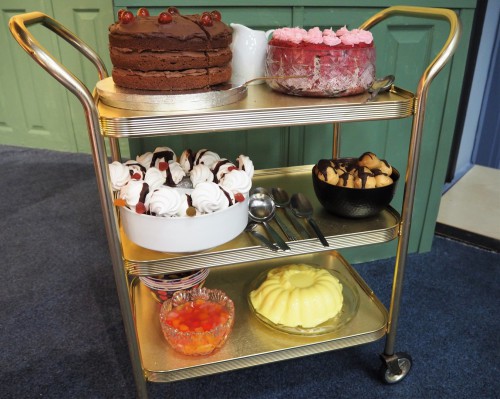 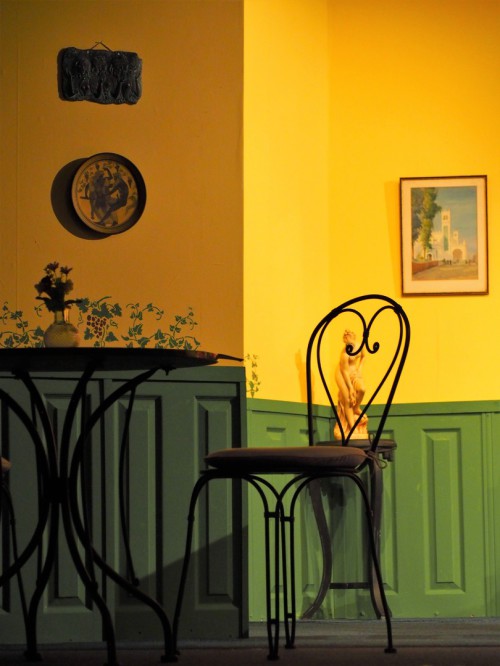 A corner of the set

Programme for "Time of My Life"

Programme for "Time of My Life"
time of my life prog.pdf
Adobe Acrobat document [10.2 MB]

Review of "Time of My Life" for Adel Bells

Our thanks to Ann Lightman for this appreciation of the play:

A cast of eight, supported by Adel Players’ superb back-stage and front of house staff entertained full houses over four nights in the Adel Memorial Hall. The auditorium has been recently improved thanks to this group and it was excellent to note the replacement of skirting and door frames, improved soundproofing between the hall and bar, and an extension in storage options for the group. The play was an interesting exploration of various themes set within one family, which kept the audience attentive throughout. Billed as a bitter-sweet comedy there was no shortage of laughs – many from the dialogue, some from the situations: the mix-up in the restaurant leading to the younger son’s romance was a comedy classic as were the antics or expressions of the restauranteurs and their staff.

Time was, as the title suggested, significant in this production as the action shifted between the present, a family celebration of the mother’s 54th birthday on January 18th 1992, the future (though the lives of the elder son and his wife) and the immediate past (via the younger son and his girlfriend). Although the family was quite small – successful business-owning parents and their two grown-up sons,  one with a newly-reconciled wife, one with a new girlfriend, it resulted in eight very different characters. A key moment was when the father proposing a toast to his wife, suggested we live “in the moment” becoming aware of happy times when they occur, rather than being too busy to appreciate them unless in hindsight. He was suggesting being together as a family was one such happy time.

The rest of the play tended to challenge this notion – the family here created a rather toxic environment, first for the girlfriend, trying to fit in, but also it turned out for everyone. The wife, backbone of steel, seemed to have not fully enjoyed her life to date and certainly one felt her lack of motherly feeling for her eldest son had repercussions with him being notoriously unfaithful to his wife. This did rather stretch credulity given that usually such men have charm and/or power…conspicuously absent in his case - but he clearly had lived off the family business name and his position there. The future showed his situation deteriorating, whilst his long-suffering wife blossomed –last seen she had a new, successful partner who was a surgeon. Her transformation was a delight to note, and moved away from her previous long suffering wife role, which touched on the issue of anorexia. The younger son, who was “loved” (indulged?) by his mother fared little better, being unable to stick to anything for long, whether job or girlfriend. The mother’s revelations to her husband after the dinner probably also contributed directly to his death in a car accident – a mixture of a late night and too much to drink was it seemed in this case, a fatal mix.

The exploration of “creativity” in this play was interesting, given I would have expected a playwright not to have viewed it so negatively. The eldest son had “as much creativity as an ironing board” I think was the phrase – undoubtedly a negative. But the youngest son was “creative” (according to his mother at least). Here you could substitute idler, wastral – again negatives. The husband’s creativity in financial accounting was hardly a plus! However, the women were creative, dealing with the situations that life gave them, adapting, creating and moving forwards – either to new work, partners or travelling further afield.  Although the play was set in the early 1990’s it could have been any time in the past (some of the dialogue took me back to the 1970’s) many themes were just as applicable today, with the decline of small businesses and the bigger corporate takeovers.

All in all a very enjoyable evening. The cast, as always were superb – mainly totally believable characters which in this production were far more than two dimensional – they had depth (perhaps aided by the switch in times through the play) and often great strength, particularly the women. The waiters had less depth, but excellent comedic roles. The wardrobe ladies again excelled – some wonderful outfits which reinforced the characters they dressed and their mood – very well illustrated in the case of the elder son’s wife. The props department need a special mention – so many, the tables were constantly being laid and cleared in this busy Italian restaurant!

And thanks also to Alison Garrett, a regular supporter, for this:

"[Thank you] to everyone involved in the  'Time of My Life' production last week…the acting was excellent .Two people new to Adel Players (my brother and his partner) were very impressed and could not believe the actors were all amateurs with 'other jobs'.  I was so glad they loved it as [I am] always a bit nervous going over the top as to how good Adel Players are but once again you came up trumps. Always lovely to see everyone laughing too so thank you for that.  And your 'new' actors were all outstanding".