Meet some of our members!

Here is where we post informal profiles of some of our members asking them what brought them to the group and what it is really like in the world of AmDram!

If you would like to see more profiles, just click here to look at several more in our archives. 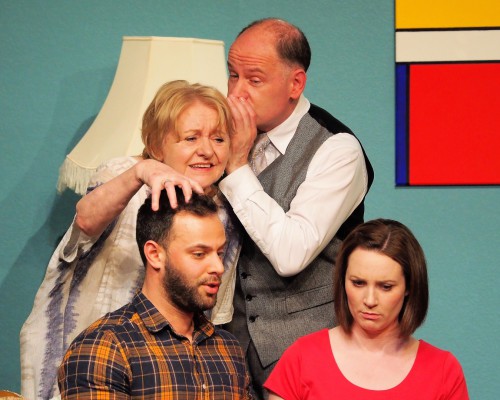 How long have you been interested in Amateur Dramatics?

I have been interested in acting ever since I was a young boy, watching Laurel and Hardy movies and laughing out loud with my dad at another fine mess that they had gotten themselves into. My dad’s love of slapstick was contagious and made me want to re-enact scenes whenever possible. Later, my love of martial arts movies brought me to Jackie Chan’s ‘Wheels on Meals’, a choreographed masterpiece which had my brother and I in stitches (part misadventure, part comedic genius from Jackie himself). Watching films from all genres made me appreciate the art of storytelling, but it was my mother’s decision to go and see Robert Lindsay play Richard III in Manchester that made me aware of the power of the stage. It was fantastic and I remember the awe I felt for anyone willing to go up on stage and pretend to be someone else with such dedication that a room full of people could instantly forget themselves.

How and when did you discover Adel Players?

It was a dark and stormy… no, it was January 2019 and a close friend told me she’d got herself a part and that they still needed a male character. It was the chance I’d been waiting for and I took it, putting myself up for audition - by far and away the most nerve- wracking experience – and getting my first part in a comedy!

What different roles have you performed within the group?

I’ve played a few roles now, from light-hearted comedy all the way to a part in a rather dark plot, Wait Until Dark. It is nice to have a variety of roles to go for, with different styles of direction, and I feel like I learn something new at every rehearsal.

What was your favourite production you have been involved with?  My favourite production has to be How the Other Half Loves, an Ayckbourn set in the early 70’s. I played a nasty piece of work called Bob and got to shout and generally be chauvinistic and selfish. It really is true that it is more fun playing the bad guy!

Indulge a memory and tell us about a special time or funny incident that you have from Adel Players?

In my first play, Spirit Level (set in an old country cottage) I would become ‘possessed’ by the ghost of the previous tenant, who would make me say things and behave erratically. This was my first opportunity to bring about some silly humour to the stage and try and make the audience laugh. During the run of 4 nights, the silliness became more exaggerated and on one night I remember looking at my on-stage wife (played by Laura Romanowski) and almost blurting out with laughter at the face she was pulling just to keep from laughing.

The group are so welcoming, eager to help and give you pointers along the way. It feels like a family and I’m proud to be part of it.

How has Adel Players improved your life?

It has given me the chance to push myself and try something new, something that I had dreamt about. It is also a great way to practice public speaking, something I find very useful at work!

Where do you see Adel Players in ten years’ time?

Thriving with new ideas and performing more contemporary plays, while still retaining the charm and community spirit it has now.

How long have you been interested in Amateur Dramatics?

I have been interested in amateur dramatics for quite some time now. I was in a drama group at school but never really pursued my interest when I left. Also, since my role as the Artful Dodger was received with great acclaim in my boy- scouting days, I have had an interest in all things am dram. Going back, when my wife and I were on holidays in this country, we always took the opportunity to look out the local am dram group and went along to see their efforts. They don't get paid you know! It's all for fun!!

How and when did you discover Adel Players?

I was attending the plays for many years before becoming an active member of the group. My company used to supply the group with all of their timber requirements, and then my friend Mike Andrews invited me to get more involved.

So you could say that it was all his fault!!

What different roles have you performed within the group?

Whilst certain directors have allowed me to occupy minor acting roles in the past, they all too quickly realised that my acting abilities could be described as somewhat limited! My time is now spent set-building, and in a backstage capacity. Set-building is moderately hard work, but great fun. The camaraderie in our group is second to none, and watching a set come to life is a great joy and a big part of the overall creative process.

Just because you can’t, or don’t want to act, does not mean that you cannot be a valued member of the team. Also, I am reliably informed that I can be trusted at stage management, and I have been fortunate enough to have been chosen by respective directors to occupy this position in a fair few productions. A responsible and rewarding job.

What was a favourite production that you have been involved with?

I have a few favourite productions, and it is always great sitting around and reliving the old plays, and sets. There are always numerous stories. But the production that sticks out for me, (apart from “Allo Allo”, which was my acting debut!) would have to be "Journeys End". Powerful play, superb acting. The set seemed to take as long to build as the first world war itself! But was it worth it? (rhetorical question; it certainly was). Also "All my Sons", and "Haunting Julia" were personal favourites too. I could go on (and frequently do!!)

Indulge a memory and tell us about a special time or funny incident that you have, from Adel Players.

I have had many special times with my friends in the group. Set-building time is special to me, and the camaraderie and good feeling between us is very apparent. Nobody is press-ganged or forced into helping. As play week gets nearer, sometimes tempers get shorter, but it's all sorted out amicably. I mean, we are all adults, aren't we (I think!)?

I am always constantly surprised and amazed at the level of commitment and effort that members put in. This is in no small part due to our committee, and the dedication shown by our chairman, Dianne. I have seen several amateur dramatics productions around the country over the years, and I am constantly amazed at the quality of our productions and the abilities of our talented actors. Our audiences comment favourably, on a constant basis.  The committee spend a great deal of time reading and selecting the plays that they think are most suitable for the group. They rarely get the choices wrong. However, it is wrong to seek out certain people for praise, when in actual fact the whole group should be recognised. Everybody plays their part (a little amateur dramatics joke there! Sorry!!)

How has Adel Players improved your life?

Well, since my retirement it gets me out of the house, so therefore the risk of being strangled by my wife now, has lessened considerably! But, as you can no doubt tell, I very much enjoy being a member of the group and it has enriched my knowledge in several ways associated with plays and playwrights. Be it rehearsal, set building or play nights, we always seem to spend a great deal of the time laughing. This has improved my social life tremendously, as goodness knows, you need something to laugh at these days, don't you? There's enough bad news and misery out there at the moment isn't there?

Where do you see Adel Players in ten years time?

I see the group as being more of the same ultra-successful association as they are today. Moving on from strength to strength. Hopefully still the same format, 3 plays and a murder mystery per year. Rehearsals, green room events, theatre trips, annual dinner and AGM. Hopefully the same group and more, of committed people podging along, making a profit and donating to charity. I would very much hope that we can attract some younger members to carry on the tradition and broaden our repertoire. It’s a whole social scene, and if I'm lucky and I keep behaving myself, then they still might allow me to carry on being a member and keep on having fun with them (Shush, don't tell the general public that I said that. They will all want to join!!)