Our longest-serving member, Barbara Trickett - who was Chair of Adel Players for many years - died peacefully on the evening of Wednesday 26 February, 2014, at St James' Hospital. She was 86.

Barbara had been a member of Adel Players since the early 1950s and still continued to support us as much as she could, despite ill health in recent years. 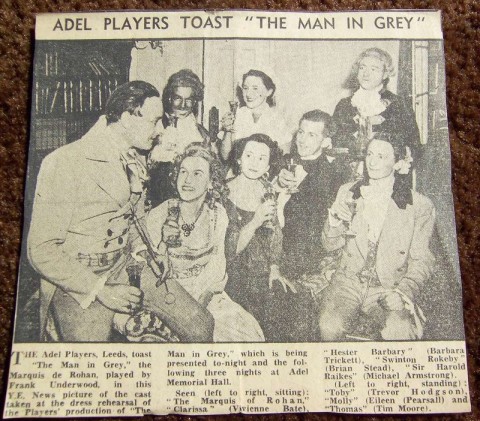 Newspaper cutting for 'The Man In Grey' (October 1953)

The first play I saw at Adel was the farce 'Rookery Nook' in February 1953. Barbara played the part of Poppy Dickie and appeared in her underwear. I thought "this looks a lot of fun" and soon after, I joined the Adel Players – I wanted to be part of it.

My first role was in 'The Man in Grey' (October 1953) where I played the Marchioness of Rohan (a trophy wife) and Barbara played a gipsy girl for whom the Marquis had the hots. She bumped me off so as to get a clear run at him. I had never been on stage before, but Barbara made it so easy for me. She was a delight to work with, so responsive and completely reliable. We had laughs galore during rehearsal and when we discovered we had the same birthday, we felt a special affinity.

I have so many memories of her performances, like the time she played a witch, complete with hooked nose, pointy chin, black cloak and a pointed hat in the children's play 'Hans, The Witch and the Gobbin' (January 1965). At that time, she was Headmistress of Adel Primary School, and several of her pupils came to the Saturday matinee. When Barbara made her entrance, a little voice shouted out with great glee "hee hee hee, it's Miss Trickett!"

In 'Goodnight Mrs Puffin' (October 1965), where she played the title role, the curtain fell after Act I and Barbara collapsed gracefully in a dead faint behind it. She'd been unwell for a few weeks. However, after a drink of water and a few deep breaths, she went on and finished the play like the trouper she was, the audience totally unaware there'd been a problem.

We used to have a Stage Manager who enjoyed practical jokes. In one play, a suitcase was set on stage and Barbara had to pick it up and take it upstairs. The wretched man had put a huge coping stone in it and when she took hold of the handle, the case stayed on the floor and Barbara almost took off! She stifled a giggle and muttered "Oh heck!" and got over the problem somehow. She took it in good part, bless her.

Adel Players are performing 'The Importance of Being Earnest' in April 2014, but we first did it in 1966 when Barbara and I played Gwendolyn and Cecily. Again, a most happy collaboration. We were both about 20 years too old for the parts as described, but we were slim and young at heart and I think we got away with it.

I could go on, but it would fill a book. I am deeply sad that we have lost her, yet all my memories of her are happy ones – what better epitaph could anyone have?

Barbara was Chairman of Adel Players for, I think, 12 years, a role she filled with great charm, tact and firmness when necessary.

Although latterly her sight and hearing were somewhat impaired, and her health deteriorated after her hip operation, I don't think she ever missed a play. She remained an enthusiastic supporter, no matter what it cost her in effort, right up to our January 2014 play.

God love her, we shall not see her like again. 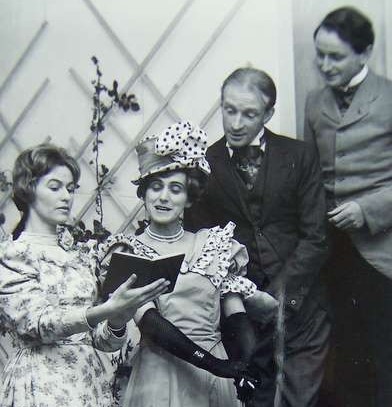 Viv and Barbara in 'The Importance of Being Earnest' (October 1966)