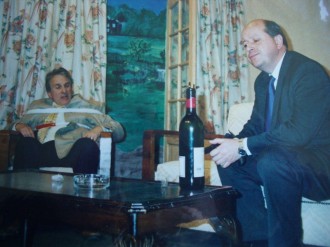 I first met John in 1981 when he auditioned for the Mediaeval Mystery Playsperformed in front of Adel Church; he was cast as Adam and spent a week in flesh coloured tights and a cricket box!

It was apparent that he had experience and talent and in October of the same year, he made his debut at the Adel Players in 'The Paragon'. This was a play about a father who founded a sports pavilion in memory of his son who had died in Normandy in 1944. John played the son who turns up at the end having deserted and been on the run for years – his first role as the villain!

John could adapt to any part, but undoubtedly his favourites were comedies and thrillers. He would spend hours at Wakefield Library reading plays until he found one that would have the audiences laughing out loud or gasping in terror. He always wanted to be the baddie in thrillers and he turned in many menacing performances, particularly in one of my favourites, 'Theft' (October 2003).

I had the pleasure of acting in several farces with John including 'Funny Money' (January 2000) and 'Out of Order' (January 1997); he had a wonderful sense of timing and was always looking to add in another piece of business to extract an extra laugh – even during the run!

He directed many successful plays including 'Snake in The Grass' (October 2005) and 'The Devil at Midnight' (January 2003), but his first love was being in front of the lights.

One of my favourite memories is 'My Three Angels' performed in January 1984 where Michael Armstrong, John and I played the title roles. John had this wonderful wood and leather snake – Adolphe - with which he would threaten various other characters into submission. From the audience, it looked like a real creature due to John's careful manipulation. All of us had so much fun with the production.

John gave tremendous support to Adel Players and I am very proud that I knew him as a first class actor and director, but most importantly a very good friend. 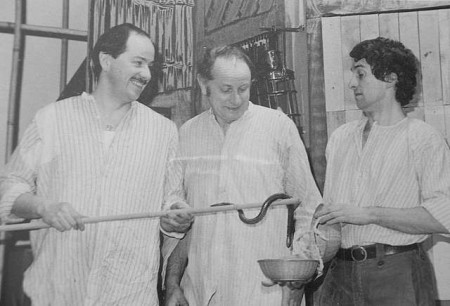 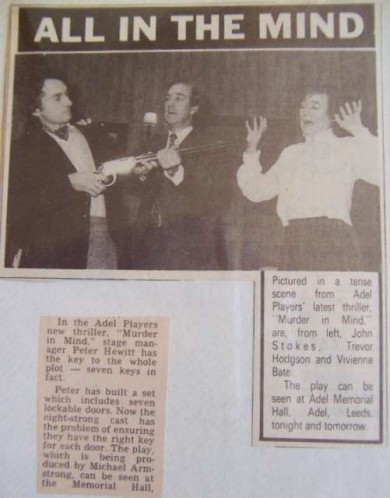 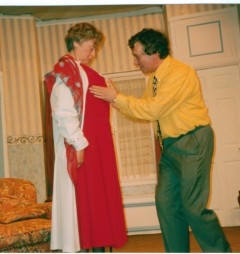 John played a huge variety of parts over the years. I remember very clearly in 'Murder in Mind' (November 1984), he terrified the daylights out of me. I was hiding in a chest while he crept about the room with a bottle of acid in his hand, chanting: "I'm coming to find you, you know I'll find you". For the only time in my career with Adel Players, the role seized hold of me and I became hysterical!

Fortunately, that was the end of Act I, but it took me the whole of the interval to calm down. I got my own back in the end though - I shot him, point blank, and John, never one to do things by half, slithered down the wall leaving a trail of bloody hand prints.

In 'The Whole Truth' (October 1999), we played husband and wife and we had to have a fight. I urged him not to hold back and we really went for it - I had a few bruises to show for it, but it was quite exhilarating.

In 'Cash On Delivery' (April 1999), I played a Benefits Fraud Inspector, Miss Cowper. For some reason, Mike Andrews was supposed to dress up as Miss Cowper, so when John sees the real Miss C, he thinks it's Mike in disguise (yeah, I know, a stretch of the imagination, but this is farce remember). He congratulates him/me on how realistic his/my boobs are, squeezes them and buries his head between them.

At rehearsal, John was embarrassed and didn't want to do it. Susie from the auditorium called out: "Get hold of them and give 'em a good shake!" I convinced him he was only grabbing a load of padding, and it was all right on the night.

Who can forget his lascivious description of screws tumbling from the machine in 'Mr Wonderful' (April 2003)? John got the award for Best Cameo Role for that at the Wharfedale Festival.

And in 'Nobody's Perfect' (January 2004), he made such an attractive woman, dressed in Barbara's blue suit. He really relished dressing up for that. Of course, he really relished every role he took on - he was such an enthusiast. 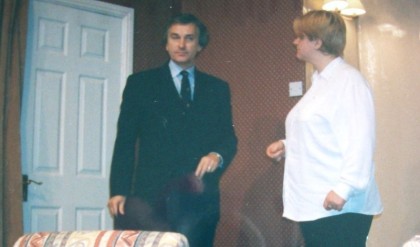 John Stakes with Abigail Rayner in 'The Whole Truth' (October 1999)