Michael was a founder member of the Adel Players and was involved in well over 100 productions, acting, directing and backstage.

Past and current members have enjoyed his advice, encouragement and friendship over the past 66 years.

His contribution to the group is immeasurable and he will be greatly missed.

Below are photographs of Michael in various roles down the years, together with reminiscences from his colleagues. 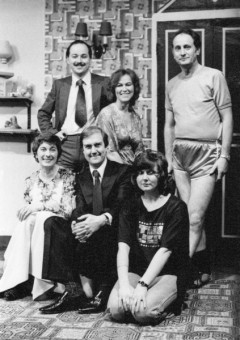 How The Other Half Loves, 1981 (top row: Mike Andrews, Viv Bate and Mike Armstrong)

I joined Adel Players in 1976 and in my first play for the group, Michael was savagely murdered with a pair of gardening shears! He staggered through the French doors with them protruding from his back as the lights went down for the end of the Act.

Michael had a wide repertoire and over the next few years, I saw him play a variety of parts including a murderer, murder victim, policeman, judge and a drunken vicar, as well as the lead in comedies and dramas.

For the next few years, I had the privilege to act alongside him in several productions, but none more enjoyable than 'My Three Angels', which we performed in 1984. The story was about three convicts (Michael, John Stakes and me) on a Caribbean island who come to the aid of a local family in need. Our first entrance took place halfway through Act 1 via a ladder from the 'roof of the house'. This meant we had to sit, precariously, on top of the flat run, a narrow timber beam, for about 20 minutes after curtain up and then make our entrance down a ladder. Needless to say we had an amusing time trying not to make each other laugh, or fall on to the stage!

Over the many years of knowing Michael, he was generous with his advice. He was always willing to impart tips from his extensive knowledge of amateur theatre; I learnt many things from him about acting and in particular comedy timing.

Backstage on Sunday mornings, I was introduced to the 'art' of set construction and thankfully Michael had the patience to put up with my non-existent woodworking skills. Into his 80s, Michael would still come along to give a hand, enjoy the banter and drink a half of Sam's.

Despite his many interests, Michael never stinted in his support for Adel Players. Many past and present members have benefited from his friendship and he will be remembered for many years to come. 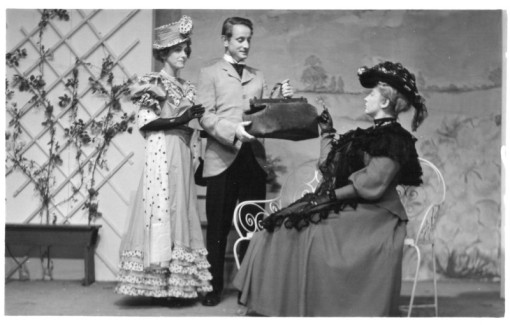 The Importance Of Being Earnest, 1966

I remember Michael, at well over 80, going up the ladder that just reached the edge of the hatch, pulling himself up into the loft and stepping along the joists, while I shoved bags of seat cushions up for him to stow. Disaster waiting to happen, but thank God it never did!

Many years ago, we had a stage manager prone to practical jokes. He thought it great fun, on the last night of one play, to substitute real whisky for apple juice. Michael, playing a vicar, knocked back several glasses, as required by the script, and really didn't have to act being blotto! In fact, his eyes were still rolling a bit at the after-show party. No doubt he drove himself home, but people didn't think much about drinking and driving in those dim and distant days.

Did you know that the "chaise longue" which has featured in countless plays was made by Michael (and possibly A N Other)? I think it was for 'Black Chiffon' in 1963. 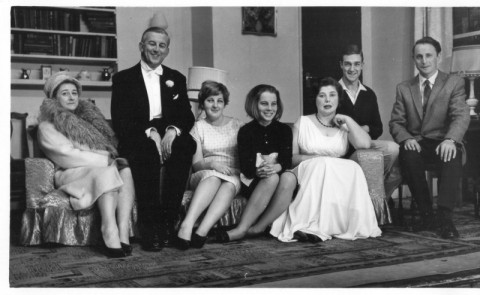 It was with great personal sadness that I learned Mike had died.

Mike was the first person I spoke to at Adel. I had been given his name by a mutual friend who thought I might like to try acting and told me about how Mike was a member of Adel Players. So I rang him and arranged to come to a reading for the Agatha Christie play, 'An Unexpected Guest'.

He was very welcoming, as were all of the Players in fact. And of course that was my first play. During rehearsal, if he was around, he was very encouraging. I remember, quite close to performance week of that play, after one rehearsal he came up to me and said, "You're doing very well. Just speak up so we can hear you!"

I always got on with him because we shared the same dry, quirky sense of humour. I have particularly fond memories of set building with him. Many a Sunday running up to a given play it would be Mike and I working away, chatting, laughing, talking about anything and everything. He was an expert at building things straight. It had to be straight! But, it taught me that every detail about the play should be just right. You can't argue with that.

I remember Mike when he came to see the play 'Someone Waiting', which I found deeply affecting because he had played the same character as I did when Adel did it some years before and he shared what he could remember of it. It seemed so poignant a moment.

I can think of no more fitting tribute than that, during one set-build morning for 'Nude With Violin', those of us that were there raised a glass and drank to his memory. For me, it felt as if he were there. He was a mainstay of the Players for many decades and so full of character. I will certainly miss him. 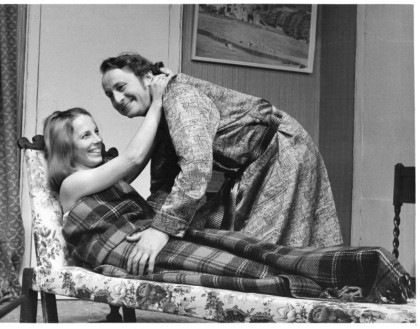 After I first joined Adel Players, the backstage team consisted of Mike Armstrong, Pete Russell, Pete Stringer and me - and they made me very welcome.

It was always a great laugh working on the set on a Sunday morning: we took the mickey out of one another constantly! Before every production, Mike used to ring me up to arrange for us to go off in his car to Leeds market to buy the wallpaper needed, and after finding what we wanted, we'd always stop there for a coffee and a chat.

Because of his engineering background, Mike insisted on measuring everything we were going to use to construct the set, even every piece of wallpaper; and at every post-production party, Mike's home-made trifle was a worthy rival to my bread-and-butter-pudding.

Mike, we miss you. 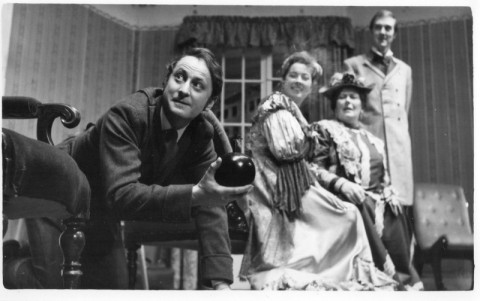 One of the memories I have of Mike involves a play we were in together called 'Donald and the Dragon' (January 1985).

I played the dragon and he was my helper! I can't remember his character's name but I have it on film. The dragon had a long tail, and Mike would try his best to tread on it, nearly strangling me each time.

On another occasion, Peter Stringer and I put in a fireplace tied to a rope and I found a pulley and fitted it to the ceiling. It was heavy, and Peter and I said to Mike (who was in the play) that he would have to pull the fireplace up before he entered. The look on Mike's face... we had a job keeping ours straight

Mike, Peter Stringer and I spent quite a long time together on the stage setting up, often just the three of us as membership was quite small. On one occasion we worked all the days over Easter. Jeanne wasn't too pleased, she has never let me forget it.

Michael was a perfectionist and always made a model of the set and his suitcase of tools was so helpful - you could find all the tools you needed. I have loads of happy memories of Mike and I miss all the days we all worked together. We were 'The Three Musketeers'! 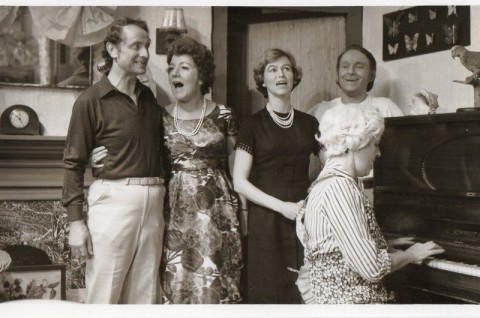 The Summer of the Seventeenth Doll, 1972

Michael graduated from Leeds University with a First Class Honours Degree in Mechanical Engineering, towards the latter end of the Second World War. He was then called up and became a junior Engineering Officer in the Royal Navy. I remember him telling me of his first posting to a ship and the Chief Engineer telling him he needed to discover every inch of the ship from stem to stern and superstructure to the bilges - no mean feat! Michael had a great enjoyment in doing so.

This willingness to become involved became very apparent at Adel Players, his attitude of can do, will do and have done, was where Michael derived a great deal of pleasure and where Adel Players derived a great deal of benefit. There were many sets on a Tuesday night which looked bare and abysmal, which for Wednesday night's rehearsal Michael had totally transformed, added to and made into a set that we could all be proud of. Quite often this was down to the time and effort dedicated by Michael during the day of Wednesday. You could always tell if there was a particular project which Michael was interested in; out would come the note pad of graph paper, a sketch would be made and then things would go quiet for a while, suddenly we would have revealed to us what it was he had been working on. Hence the fore-stage!

Mike had a great many interests. Most were of a practical input, whether doing repairs on his house in Leeds or the one in the Lake District, Adel Players, City of Leeds Symphony Orchestra, the Association of Leeds Engineers, playing in the orchestra for the Gilbert and Sullivan Operas. Nothing was too much trouble. He was also an active member of the RSPB where he would stand in supermarket doorways, asking people for a tin of something as a donation to benefit the RSPB. Michael's input was always very positive and practical.

His holidays were spent travelling the globe, mainly with the tour company Exodus. He would visit different destinations, countries which we now have more knowledge of, such as Uzbekistan. He would quite often say 'yes, this time we might see Everest if we are lucky, but at some distance of course'. I remember these holidays would invariably involve a week's walking somewhere in this country as a training exercise, quite often with people whom he knew from the holiday group that vacationed together year on year.

One year when he was well into his 70s or indeed possibly 80, he decided that for his training week, we would 'do' the Coast to Coast long distance walk, from St Bee's Head to Robin Hood's Bay. He would camp out each night, carrying all his equipment with him. Having chosen a particularly wet week to do this project, he wisely decided to leave his camping gear at this house in the Lakes, and use bed and breakfast accommodations - much more comfortable.

Around this time, I recall Michael saying to me 'I think I should like to go for another weeks skiing, what do you think?' Also about this same time, he was still carrying the sections of the fore stage on set down Sundays. We would sit in the bar on Sunday afternoons, having been set building in the morning, putting the world to rights, especially Adel Players. We would both say, 'we won't stay long, just the one drink'... but invariably we would be thrown out by Simon at 3 o'clock.

Always generous with his time, advice and ability - these are the things I will remember about Michael.